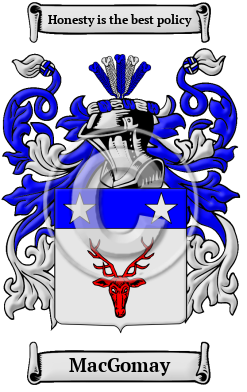 The ancient name MacGomay was first used by the Strathclyde people of the Scottish/English Borderlands. It is derived from the ancient personal name Thomas, meaning twin.

Early Origins of the MacGomay family

The surname MacGomay was first found in Ayrshire (Gaelic: Siorrachd Inbhir Àir), formerly a county in the southwestern Strathclyde region of Scotland, that today makes up the Council Areas of South, East, and North Ayrshire, where the first listings of the name were found in the early 1300s. They include: John Thomson, "a man of low birth, but approved valour", leader of the men of Carrick in Edward Bruce's war in Ireland in 1318 and Adam Thomson who was listed as Lord of Kylnekylle, Ayrshire c. 1370-80. Closing out that century was Johannes filius Thome who was elected bailie of Aberdeen in 1398. [1]

Early History of the MacGomay family

In Medieval times, spelling and translation were not nearly so highly developed as today. They were generally carried out according to the sound and intuition of the bearer. For that reason spelling variations are extremely common among early Scottish names. MacGomay has been spelled Thomson, Tomson, Tamson, Thomsoun, M'Comie and others.

Notable amongst the family at this time was George Thomson (c. 1619-1676), an English physician, medical writer and pamphleteer, leading figure in an attempt to create a "College of Chemical Physicians"; and Charles Poulett Thomson, 1st Baron Sydenham (1799-1841), British politician, the first Governor of the united Province of Canada. Laurence Tomson (1539-1608), was an English politician, author, and translator, born in Northamptonshire and Richard Tomson (fl. 1588), was an English mariner who may presumably be identified with the Richard Tomson of Yarmouth. [4] Alexander Thomson (1763-1803) was a Scottish poet, born in Edinburgh, and was an close friend of Robert Anderson (1750-1830.)...
Another 119 words (8 lines of text) are included under the topic Early MacGomay Notables in all our PDF Extended History products and printed products wherever possible.

Migration of the MacGomay family to Ireland

Some of the MacGomay family moved to Ireland, but this topic is not covered in this excerpt.
Another 45 words (3 lines of text) about their life in Ireland is included in all our PDF Extended History products and printed products wherever possible.

Migration of the MacGomay family

Unrest, poverty, and persecution caused thousands to look for opportunity and freedom in the North American colonies. The crossing was long, overcrowded, and unsanitary, though, and came only at great expense. Many Strathclyde families settled on the east coast of North America in communities that would form the backbone of what would become the great nations of the United States and Canada. The American War of Independence caused those who remained loyal to England to move north to Canada as United Empire Loyalists. In the 20th century, Strathclyde and other Scottish families across North America began to recover their collective heritage through highland games and Clan societies. Among them: Edward Thomson arrived on the "Mayflower" at Plymouth, Massachusetts in 1620; Andrew Thomson settled in Harbour Grace, Newfoundland, in 1801.