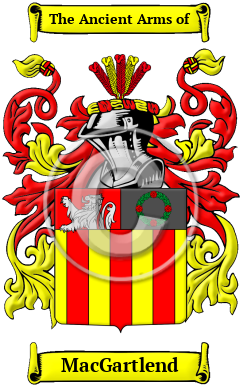 The history of the ancestors of the MacGartlend family begins among the Pictish clans ancient Scotland. The name MacGartlend comes from the Old English personal name Gærland. However, the surname MacGartlend may be a local name derived from some place which is now unknown; gær and land are common elements in Old English nomenclature.

Early Origins of the MacGartlend family

The surname MacGartlend was first found in Perthshire (Gaelic: Siorrachd Pheairt) former county in the present day Council Area of Perth and Kinross, located in central Scotland. Searching through early records, we discovered: "Robert Gerland of Perthshire rendered homage [to King Edward I of England] in 1296, Thomas Gerland was rector of the church of Banevy, 1321, and Gilbert Gerland was bailie of Perth, 1359. Thomas Garland was burgess of Linlithgow in 1360, and Roger Gerland or Garland was rector of the church of Eglisham, 1368-1370." [1]

Early History of the MacGartlend family

Prior to the invention of the printing press in the last hundred years, documents were basically unique. Names were written according to sound, and often appeared differently each time they were recorded. Spelling variations of the name MacGartlend include Garland, Garlland, Gerland, Gerlond and others.

Notable amongst the Clan at this time was Augustine Garland (fl. 1660), English Regicide, son of Augustine Garland, attorney, of Coleman Street, London. By the death of his father, in 1637, he succeeded to property in Essex at Hornchurch and Waltham-holy-Cross, and at Queenborough in the island of Sheppey. On 9 May 1660 he appeared before the lord mayor of London and claimed the benefit of the king's declaration. Nevertheless he was put on his trial, and on...
Another 77 words (6 lines of text) are included under the topic Early MacGartlend Notables in all our PDF Extended History products and printed products wherever possible.

Migration of the MacGartlend family to Ireland

Some of the MacGartlend family moved to Ireland, but this topic is not covered in this excerpt.
Another 175 words (12 lines of text) about their life in Ireland is included in all our PDF Extended History products and printed products wherever possible.

Migration of the MacGartlend family

The freedom of the North American colonies was enticing, and many Scots left to make the great crossing. It was a long and hard journey, but its reward was a place where there was more land than people and tolerance was far easier to come by. Many of these people came together to fight for a new nation in the American War of Independence, while others remained loyal to the old order as United Empire Loyalists. The ancestors of Scots in North America have recovered much of this heritage in the 20th century through Clan societies and other such organizations. A search of immigration and passenger lists revealed many important and early immigrants to North America bearing the name of MacGartlend: Daniel and Elizabeth Garland who settled in Barbados in 1654; Hugh Garland settled in Virginia in 1634; Peter Garland settled in Virginia in 1650; Robert Garland settled in Virginia in 1655.