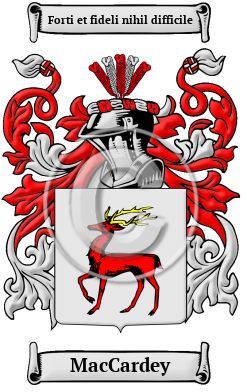 The many Irish surnames in use today have long rich histories behind them. The name MacCardey originally appeared in Gaelic as Mac Carthaigh, which is derived from the word "carthach," which means "loving."

Early Origins of the MacCardey family

The surname MacCardey was first found in County Kerry and much of County Cork, in the area formerly known as Desmond. One of the oldest and most important of all Irish families, the MacCarthy family claim descent from Oilioll Olum, the 3rd century King of Munster who gave the region of Desmond to his son Eoghan after his death. Eoghan's descendants were known as the Eoghanacht, and the surname MacCarthy is derived from Carthach, an 11th century lord of this group who was killed when the Lonegans set his house on fire.

Early History of the MacCardey family

One must realize that attempting to record a Gaelic name in English was a daunting task. Even today the translation is a difficult one. Accordingly, spelling variations were the norm. Variations found include MacCarthy, MacCarty, MacArty, MacArthy and others.

Notable among the family name at this time was Blessed Thaddeus McCarthy (c. 1455-1492), an Irish ecclesiastic who never ruled his see, Bishop of Ross, Ireland in 1492 and Bishop of Cork and Cloyne in 1490, his feast day is 25 October; Charles MacCarty (Cormac Oge McCarthy), (d. 1640). He was from the ancient line of Dermot McCarthy, King of Munster, and was created the 1st Viscount Muskerry in 1628. His motto was "Forti et fideli nihil difficile, " which translates as "to the strong and faithful, nothing is...
Another 89 words (6 lines of text) are included under the topic Early MacCardey Notables in all our PDF Extended History products and printed products wherever possible.

Migration of the MacCardey family

A great wave of Irish migration occurred during the 19th century as a direct result of English colonial rule and tight-fisted absentee landlords. Many of these Irish immigrants boarded passenger ships bound for North America. Those who migrated early enough were given land in either British North America or the United States; those who came in the late 19th century were typically employed in industrial centers as laborers. At whatever age they undertook the dangerous passage to North America, those Irish immigrants were essential to the speedy development of the two infant nations to which they arrived, whether they broke and settled land, helped build canals, bridges, and railroads, or produced products for consumer consumption. An examination of immigration and passenger lists has uncovered a large number of immigrants bearing the name MacCardey or one of its variants: Daniel McCarty, who came to Boston in 1742; David McCarty, who settled in Maryland in 1755; Alexander McCarthy, recorded in the New York Colonial Muster Rolls in 1760.