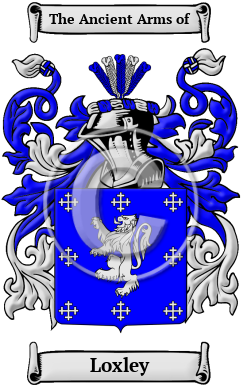 The ancient history of the Loxley name begins with the ancient Anglo-Saxon tribes of Britain. The name is derived from when the family resided in the region of Loxley in Staffordshire. [1] Loxley is a topographic surname, which was given to a person who resided near a physical feature such as a hill, stream, church, or type of tree. Habitation names form the other broad category of surnames that were derived from place-names. They were derived from pre-existing names for towns, villages, parishes, or farmsteads.

Early Origins of the Loxley family

The surname Loxley was first found in Staffordshire at Loxley, a liberty, in the parish and union of Uttoxeter, S. division of the hundred of Totmonslow. Alternatively the family could have originated in the parish of Loxley in Warwickshire. The latter was listed in the Domesday Book of 1086 as Locheslei [2] and literally meant "woodland clearing of a man called "Locc," from the Old English personal name + "leah." [3] Interestingly, "Charles I. slept at the old mansion-house of Loxley the night before the battle of Edge-Hill, and many of those who were slain in the engagement were buried in the churchyard here." [4]

Early History of the Loxley family

This web page shows only a small excerpt of our Loxley research. Another 91 words (6 lines of text) covering the years 118 and 1180 are included under the topic Early Loxley History in all our PDF Extended History products and printed products wherever possible.

Until quite recently, the English language has lacked a definite system of spelling rules. Consequently, Anglo-Saxon surnames are characterized by a multitude of spelling variations. Changes in Anglo-Saxon names were influenced by the evolution of the English language, as it incorporated elements of French, Latin, and other languages. Although Medieval scribes and church officials recorded names as they sounded, so it is common to find one person referred to by several different spellings of his surname, even the most literate people varied the spelling of their own names. Variations of the name Loxley include Loxley, Lockley, Locksley and others.

More information is included under the topic Early Loxley Notables in all our PDF Extended History products and printed products wherever possible.

Loxley Settlers in Australia in the 19th Century

Loxley Settlers in New Zealand in the 19th Century