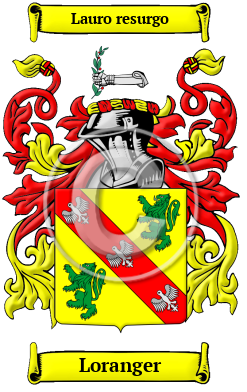 Scotland, with its skirl of bagpipes and colorful tartans is the homeland of the noble surname Loranger. In Scotland, hereditary surnames were adopted according to fairly general rules and during the late Middle Ages, names that were derived from localities became increasingly widespread. Local names originally denoted the proprietorship of the village or estate.The Loranger family originally lived in the French province of Lorraine, before moving to Scotland, where the name was passed down through many generations.

Early Origins of the Loranger family

The surname Loranger was first found in Northumberland, where they held a family seat as Lords of the Manor of Kirk Hall some say, from the time of the Norman Conquest of England by Duke William of Normandy in 1066 A.D. These estates were apparently obtained by the marriage of the Knight of Loraine to the del Strother heiress. However, it was a common practice of the powerful Border Clans to have territories on both sides of the border and such was the case with the Loraines. They were also seated in Roxburghshire in the eastern marches of Scotland. Roger Loraine or Loren was the first of the name in Scotland about the year 1200. This Roger was on an enquiry concerning piracy in the Irish Sea.

Early History of the Loranger family

Notable among the family at this time was Henry II (1563-1624), known as "the Good (le Bon)", the Duke of Lorraine from 1608 until his death; Nicole de Lorraine (1608-1657), Duchess of Lorraine and Bar from (1624-1625)...
Another 37 words (3 lines of text) are included under the topic Early Loranger Notables in all our PDF Extended History products and printed products wherever possible.

Migration of the Loranger family