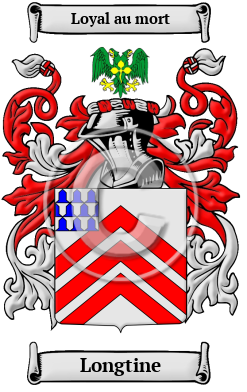 The ancestors of the bearers of the Longtine family name are thought have lived in ancient Anglo-Saxon England. They were first found in Lincolnshire. However, there are numerous villages and civil parishes named "Langton" throughout England including locals in Leicestershire, North Yorkshire, Cumbria, Durham, Kent and Dorset. This is large part due to the fact that the place name literally translates as "long farmstead or estate," having derived from the Old English words "lang" + "tun." [1] Some are listed in the Domesday Book of 1086: Lang(e)tone (Leicestershire); Langeton (North Yorkshire - now Great Langton); and Terlintone (Leicetershire - now Tur Langton.) [2] The oldest place name recorded was Langton Durham which was listed as Langadum c. 1050 eluding to it's Saxon origin.

Early Origins of the Longtine family

The surname Longtine was first found in Lincolnshire at Langton by Spilsby, sometimes called Langton by Partney, a village and civil parish in the East Lindsey district. The parish of Langton is nearby. "This parish, which has been the residence of the Langton family for more than seven centuries." [3] One of the earliest records of the name was Cardinal Stephen Langton (c.1150-1228), who was Archbishop of Canterbury (1207 until death in 1228.) He was a critical player in the dispute between King John of England and Pope Innocent III, which ultimately led to the issuing of Magna Carta in 1215. A manor which has remained to the present day in the inheritance of this house can be found at Langton by Spilsby. [4] Walter de Langton (1296-1321), Bishop of Coventry and Lichfield, Lord High Treasurer of England, and a favourite of Edward I. was born in Langton West.

Early History of the Longtine family

Until quite recently, the English language has lacked a definite system of spelling rules. Consequently, Anglo-Saxon surnames are characterized by a multitude of spelling variations. Changes in Anglo-Saxon names were influenced by the evolution of the English language, as it incorporated elements of French, Latin, and other languages. Although Medieval scribes and church officials recorded names as they sounded, so it is common to find one person referred to by several different spellings of his surname, even the most literate people varied the spelling of their own names. Variations of the name Longtine include Langton, Langston and others.

Distinguished members of the family include Stephen Langton (c. 1150-1228), Archbishop of Canterbury (1207-1228), a central figure in the dispute between King John of England and Pope Innocent III, which contributed to the crisis which led to the issuing of Magna Carta in 1215; William Langton (or William of Rotherfield; died 1279), a medieval English priest and nephew of Archbishop Walter de Gray; Simon Langton (died 1248), an English clergyman, Archdeacon of Canterbury (1227-1248)...
Another 73 words (5 lines of text) are included under the topic Early Longtine Notables in all our PDF Extended History products and printed products wherever possible.

Migration of the Longtine family to Ireland

Some of the Longtine family moved to Ireland, but this topic is not covered in this excerpt. More information about their life in Ireland is included in all our PDF Extended History products and printed products wherever possible.

Migration of the Longtine family

Searching for a better life, many English families migrated to British colonies. Unfortunately, the majority of them traveled under extremely harsh conditions: overcrowding on the ships caused the majority of the immigrants to arrive diseased, famished, and destitute from the long journey across the ocean. For those families that arrived safely, modest prosperity was attainable, and many went on to make invaluable contributions to the development of the cultures of the new colonies. Research into the origins of individual families in North America revealed records of the immigration of a number of people bearing the name Longtine or a variant listed above: Stephen Langton settled in Barbados with his wife and servants in 1680; Thomas and Rebecca Langton settled in Virginia in 1679; Thomas Langton arrived in New York in 1822..