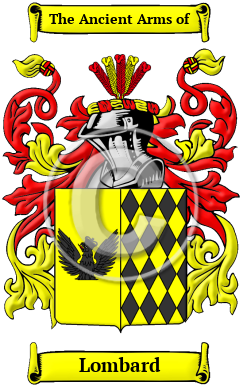 The distinguished surname Lombard emerged among the industrious people of Flanders, which was an important trading partner and political ally of Britain during the Middle Ages. As a result of the frequent commercial intercourse between the Flemish and English nations, many Flemish migrants settled in Britain. In early times, people were known by only a single name. However, as the population grew and people traveled further afield, it became increasingly necessary to assume an additional name to differentiate between bearers of the same personal name. The manner in which hereditary surnames arose is interesting. Local surnames are derived from where the original bearer lived, was born, or held land. Flemish surnames of this type frequently are prefixed by de la or de le, which mean of the or from the. The Lombard family originally lived in Huntingdonshire, where the family was found since the early Middle Ages.

Early Origins of the Lombard family

The surname Lombard was first found in Renfrewshire where it is generally understood to have been given for a "native of Lombardy. Any banker or usurer was so called." [1] "Antony, a Lombard physician, obtained a grant of the lands of Fulton, Renfrewshire, from Alan, son of Walter, the Steward, c. 1204. In 1272 Sir Antony Lumbard quitclaimed the lands to the monastery of Paisley. " [2] Moving further south to England there were numerous early entries of the family including entries in the Hundredorum Rolls: Jenteyt Lumbardus in London; Richard Lomberd in Kent; and John Lumbard in Oxfordshire. [3] Lombard Street, London, took its name from the district in which the Italian merchants resided.

Early History of the Lombard family

This web page shows only a small excerpt of our Lombard research. Another 118 words (8 lines of text) covering the years 1180, 1560, 1554 and 1625 are included under the topic Early Lombard History in all our PDF Extended History products and printed products wherever possible.

Flemish surnames are characterized by a large number of spelling variations. One reason for this is that medieval English lacked definite spelling rules. The spellings of surnames were also influenced by the official court languages, which were French and Latin. Names were rarely spelled consistently in medieval times. Scribes and church officials recorded names as they sounded, rather than adhering to specific spelling rules, and people often had their names registered in several different forms throughout their lives. One of the greatest reasons for change is the linguistic uniqueness of the Flemish settlers in England, who spoke a language closely related to Dutch. The pronunciation and spelling of Flemish names were often altered to suit the tastes of English-speaking people. In many cases, the first, final, or middle syllables of surnames were eliminated. The name has been spelled Lombard, Lombart, Limbough, Limbaugh and others.

More information is included under the topic Early Lombard Notables in all our PDF Extended History products and printed products wherever possible.

Migration of the Lombard family to Ireland

Some of the Lombard family moved to Ireland, but this topic is not covered in this excerpt. More information about their life in Ireland is included in all our PDF Extended History products and printed products wherever possible.

Lombard migration to the United States +

Study of Passenger and Immigration lists has revealed that among early immigrants bearing the Lombard surname were:

Lombard Settlers in United States in the 17th Century

Lombard Settlers in United States in the 18th Century

Lombard Settlers in United States in the 19th Century

Lombard Settlers in Canada in the 18th Century

Lombard Settlers in Canada in the 19th Century