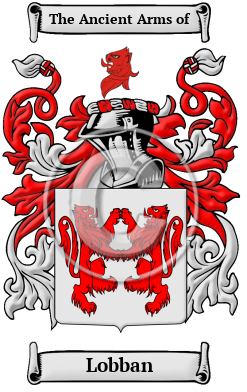 Early Origins of the Lobban family

The surname Lobban was first found in Devon or Oxfordshire. Lobb is a hamlet in the parish of Great Haseley, poor-law union of Thame, hundred of Ewelme in Oxfordshire, [1] and Lobb is also a small village in west Devon, near Saunton. [2]

It is generally thought that the name was a nickname for someone who was a "clumsy fellow" from the English word "lobb." [3] [4] "In Somersetshire the last person in a race is called the lob," [5] and as such the name was quickly scattered throughout ancient England.

However, there is another possibility; that the name was in fact, Norman in origin as the Magni Rotuli Scaccarii Normanniae had two entries for the family: William Lobes, Normandy, and Henry de la Lobe, Normandy. [6] In both cases, the entries were from 1185-1195 and points to the possibility the some of the family emigrated to England around the time of the Conquest (1066) while others remained. Indeed the early Devon and Cornwall entries seem to agree with this thought.

Early rolls list Philip de Lobbe held lands in Devon in 1242 [7] and in Cornwall, "the name of Lobb was represented in St. Kevern parish a century ago, and a gentle family of Lobb resided in Kenwyn 200 years ago, where the name still remains." [8]

Other early records include Adam Lobbe, Norfolk, who was listed in the Hundredorum Rolls of 1273 [5] and Richard Lobbe, Somerset, 1 Edward III (during the first year's reign of Edward III) who was listed Kirby's Quest. [9]

Despite these scattered early entries, today the name is generally understood Cornish and this is where we found the lion's share of notables and settlers.

Early History of the Lobban family

Spelling variations of this family name include: Lobb, Lobbe, Lob, Loeb, Loebb, Lobe and others.

Distinguished members of the family include Emmanuel Lobb (1594-1671), pseudonyms Joseph Simons or Simeon, an English Jesuit and dramatist from Portsmouth; and Stephen Lobb (c.1647-1699), a Cornish nonconformist minister and controversialist from Liskeard, Cornwall. He...
Another 35 words (2 lines of text) are included under the topic Early Lobban Notables in all our PDF Extended History products and printed products wherever possible.

Lobban migration to the United States +

Lobban Settlers in United States in the 20th Century

Lobban Settlers in Australia in the 19th Century