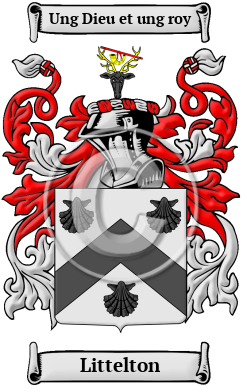 The origins of the Littelton name lie with England's ancient Anglo-Saxon culture. It comes from when the family lived in one of the many places called Littleton throughout England. The surname Littelton belongs to the large category of Anglo-Saxon habitation names, which are derived from pre-existing names for towns, villages, parishes, or farmsteads.

Alternatively, the name could have of Norman origin as one source claims the name "appears to be a branch of the De Vautort, or Valletort, from Vautort, Maine, of which Reginald, Hugh, and Goisfried de Valletort came to England in 1066." [1]

Early Origins of the Littelton family

The surname Littelton was first found in Worcestershire where "the name is derived from a place in the Vale of Evesham, where the ancestors of this family in the female line were seated before the reign of Richard I." [2]

"The celebrated jurist, Sir Thomas Lyttelton, who had three sons, whose posterity were elevate to the peerage in each line, sprang maternally from Thomas de Luttelton, of co. Worcester, temp. Henry III. The surname probably originated at one of the several places called Littleton, in that county." [3]

Sir Edward Littleton (c.1599- c.1657) was the first of four Littleton Baronets. His seat was Pillaton Hall in Staffordshire. He also held a manor in Tiddesley-Hay. "This was a royal chase, adjoining that of Cannock, till the reign of Elizabeth, who granted it jointly to the Earls of Warwick and Leicester, by whom it was sold to Sir Edward Littleton, of Pillaton Hall." [4]

Humphrey and Stephen Littleton, (or Lyttelton) who both died on 7 April 1606 were probably the most infamous members of the family. Both were both executed for their involvement in the Gunpowder plot.

Early History of the Littelton family

Before the last few hundred years, the English language had no fast system of spelling rules. For that reason, spelling variations are commonly found in early Anglo-Saxon surnames. Over the years, many variations of the name Littelton were recorded, including Littleton, Lyttleton and others.

Migration of the Littelton family to Ireland

Some of the Littelton family moved to Ireland, but this topic is not covered in this excerpt.
Another 65 words (5 lines of text) about their life in Ireland is included in all our PDF Extended History products and printed products wherever possible.

Migration of the Littelton family

To escape oppression and starvation at that time, many English families left for the "open frontiers" of the New World with all its perceived opportunities. In droves people migrated to the many British colonies, those in North America in particular, paying high rates for passages in cramped, unsafe ships. Although many of the settlers did not make the long passage alive, those who did see the shores of North America perceived great opportunities before them. Many of the families that came from England went on to make essential contributions to the emerging nations of Canada and the United States. Research into various historical records revealed some of first members of the Littelton family emigrate to North America: George Littleton, who settled in Virginia in 1649; Edward Littleton settled in Barbados with his servants in 1679; Joseph Littleton settled in Virginia in 1765..