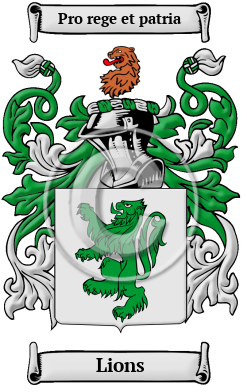 The distinguished surname Lions is a proud example of one of the more noteworthy Scottish surnames. In Scotland, hereditary surnames were adopted according to fairly general rules and during the late Middle Ages, names that were derived from localities became increasingly widespread. Local names originally denoted the proprietorship of the village or estate. The Lions family originally lived in the Norman settlement of Lyons-la-Foret, before migrating to England and Scotland. [1]

Early Origins of the Lions family

The surname Lions was first found in Perthshire where Sir Roger de Lyon settled in Scotland in 1098 and called the lands there Glen Lyon. "According to the family tradition the Lyons came to Scotland from France, by way of England, in the course of the twelfth century." [2]

Early History of the Lions family

Migration of the Lions family to Ireland

Some of the Lions family moved to Ireland, but this topic is not covered in this excerpt.
Another 50 words (4 lines of text) about their life in Ireland is included in all our PDF Extended History products and printed products wherever possible.

Lions migration to the United States +

Lions Settlers in United States in the 19th Century

Lions Settlers in Australia in the 19th Century