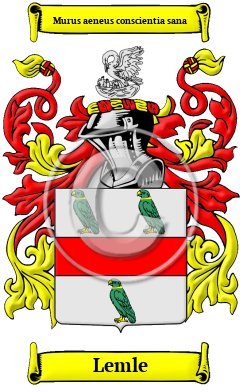 Early Origins of the Lemle family

The surname Lemle was first found in Durham where the first recorded ancestor was Liulph, who lived before the year 1080. [1] Great Lumley is a village south east of Chester-le-Street, near Lumley Castle.

Early History of the Lemle family

Notables of the family at this time include Ralph de Lumley, 1st Baron Lumley (c. 1360-1400), an English peer; and his son, Marmaduke Lumley (died 1450), an English priest, Bishop of Carlisle from 1429 to 1450; Richard Lumley, 1st Viscount Lumley; and his grandson, Richard Lumley, 1st Earl of Scarbrough (1650-1721), an English soldier and statesman who it is believed captured the Duke of Monmouth during the rebellion who was covered in a dry ditch covered with fern brakes; John Lumley, 1st Baron Lumley (c. 1533-1609), an English aristocrat who is remembered...
Another 92 words (7 lines of text) are included under the topic Early Lemle Notables in all our PDF Extended History products and printed products wherever possible.

Migration of the Lemle family to Ireland

Some of the Lemle family moved to Ireland, but this topic is not covered in this excerpt. More information about their life in Ireland is included in all our PDF Extended History products and printed products wherever possible.

Lemle migration to the United States +

Lemle Settlers in United States in the 18th Century

Lemle Settlers in United States in the 19th Century