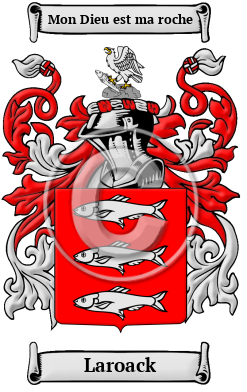 Non-Gaelic elements made their first appearance in Irish nomenclature after the Strongbow settlers began to arrive on Irish shores. Although the Irish already had an established a system of hereditary surnames, the Anglo-Normans also brought their own traditions with them when they arrived. The two systems were not extremely conflicting, and eventually drew upon one another. Although local surnames, such as Laroack, were not entirely unknown to the Irish, this form of surname was much more popular with the Strongbownians. Local names were taken from the names of a place or a geographical feature where the person lived, held land, or was born. Originally, these place names were prefixed by de, which means from in French. This type of prefix was eventually either made a part of the surname, if the place name began with a vowel, or was eliminated entirely. The local names of these Anglo-Norman invaders first referred to places in Normandy, or more typically England, but eventually for those Strongbownians or their descendents that remained in Ireland, the local names really did begin to refer to local places or geographical features of the island. The Laroack family appears to have originally lived in a rocky area or near some notable rock. The surname Laroack is derived from the Old French word roche, which means rock. The surname Laroack belongs to the class of topographic surnames, which were given to people who resided near physical features such as hills, streams, churches, or types of trees. The Gaelic form of the surname Laroack is de Róiste.

Early Origins of the Laroack family

The surname Laroack was first found in County Limerick (Irish: Luimneach) located in Southwestern Ireland, in the province of Munster, where they were granted lands by Strongbow whom they accompanied into Ireland during the Anglo-Norman invasion of 1172.

Early History of the Laroack family

Since church officials and medieval scribes spelt each name as it sounded to them; as a result, a single person could accumulate many different versions of his name within official records. A close examination of the origins of the name Laroack revealed the following spelling variations: Roche, Roach, Roache, LaRoche, LaRoach, DeLaRoach, Roack, Roch, Roiche, St.Roche, Rocheland, Rochellan and many more.

Notable amongst the family up to this time was Blessed John Roche (also known as John Neele or Neale), an Irish Catholic martyr, who died in London, England in 1588, he is the patron of sailors, mariners and boatmen, beatified in 1929. David Roche (1573-1635), Viscount Fermoy, was son and heir of Maurice, Viscount Fermoy. David succeeded to the title on his father's death in June 1600. During the rebellion of Hugh O'Neill, second earl of Tyrone [q. v.], Roche signalised himself by his loyalty, and...
Another 84 words (6 lines of text) are included under the topic Early Laroack Notables in all our PDF Extended History products and printed products wherever possible.

Migration of the Laroack family

During the middle of the 19th century, Irish families often experienced extreme poverty and racial discrimination in their own homeland under English rule. Record numbers died of disease and starvation and many others, deciding against such a fate, boarded ships bound for North America. The largest influx of Irish settlers occurred with Great Potato Famine of the late 1840s. Unfortunately, many of those Irish that arrived in Canada or the United States still experienced economic and racial discrimination. Although often maligned, these Irish people were essential to the rapid development of these countries because they provided the cheap labor required for the many canals, roads, railways, and other projects required for strong national infrastructures. Eventually the Irish went on to make contributions in the less backbreaking and more intellectual arenas of commerce, education, and the arts. Research early immigration and passenger lists revealed many early immigrants bearing the name Laroack: William Roach settled in Virginia in 1707; Edmund, Frederick, James, John, Margaret, Mary, Michael, Patrick, Richard, Thomas and William Roach all arrived in Philadelphia between 1840 and 1870.