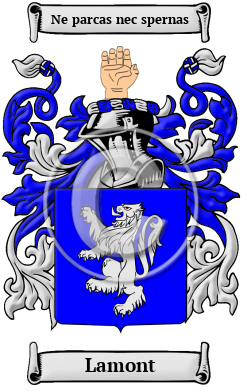 One of the most common classes of Scottish surnames is the patronymic surname, which arose out of the vernacular and religious naming traditions. The vernacular or regional naming tradition is the oldest and most pervasive type of patronymic surname. According to this custom, names were originally composed of vocabulary elements from the local language. Patronymic surnames of this type were usually derived from the personal name of the original bearer's father. The surname Lamont is derived from the Gaelic name "MacErcharwhich" which comes from the Old Norman "Logmadr." Both words mean "the law man." The Clan's early history is linked with an ancient King of Dalriada, Comgall, who was killed in 537 AD. It is from this king that the district of Cowal received its name. The Kindred of Comgall (Clan Lamont) is mentioned in the 7th century records Senchus Fern Alban (an account of the men of Scotland) and the earliest territories of the Clan included the island of Bute and Arran.

Early Origins of the Lamont family

The surname Lamont was first found in Argyllshire (Gaelic erra Ghaidheal), the region of western Scotland corresponding roughly with the ancient Kingdom of Dál Riata, in the Strathclyde region of Scotland, now part of the Council Area of Argyll and Bute, where they were granted lands by King David. One of the first known records is of John Lamont, who, in 1296, rendered homage to King Edward I of England during the latter's brief conquest of Scotland. John Lamont is described as Chief of the Clan Lamont, son of Lagman, who was son of Gilcom M'Ferchar. His brother, Molmure, also a knight, married Christina, daughter of Alexander in 1290. However, earlier records show a reference to a Ladhmunn who was son of David, the son of King Malcolm III of Scotland. The link between Ladhmunn and Ferchar, a Chief in Cowal about 1200, is not clear, even though this Ferchar had two sons, Duncan and Malcolm, both of whom granted lands to the monks at Paisley. By this time the Clan had developed branches at Perth, Argyll, the Clan seat at Cowal, and was establishing its Castles at Toward and Ascog.

Early History of the Lamont family

This web page shows only a small excerpt of our Lamont research. Another 350 words (25 lines of text) covering the years 1456, 1539, and 1663 are included under the topic Early Lamont History in all our PDF Extended History products and printed products wherever possible.

Scottish surnames are distinguished by a multitude of spelling variations because, over the centuries, the names were frequently translated into and from Gaelic. Furthermore, the spelling of surnames was rarely consistent because medieval scribes and church officials recorded names as they sounded, rather than adhering to any specific spelling rules. The different versions of a surname, such as the inclusion of the patronymic prefix "Mac", frequently indicated a religious or Clan affiliation or even a division of the family. Moreover, a large number of foreign names were brought into Scotland, accelerating accentuating the alterations to various surnames. The name Lamont has also been spelled Lamont, Lamonte, Lamond, Lammon, Lamon, Lamount and many more.

More information is included under the topic Early Lamont Notables in all our PDF Extended History products and printed products wherever possible.

Migration of the Lamont family to Ireland

Some of the Lamont family moved to Ireland, but this topic is not covered in this excerpt.
Another 40 words (3 lines of text) about their life in Ireland is included in all our PDF Extended History products and printed products wherever possible.

Lamont migration to the United States +

Some of the first immigrants to cross the Atlantic and come to North America carried the name Lamont, or a variant listed above:

Lamont Settlers in United States in the 18th Century

Lamont Settlers in United States in the 19th Century

Lamont Settlers in United States in the 20th Century

Lamont Settlers in Canada in the 19th Century

Lamont Settlers in Australia in the 19th Century

Lamont Settlers in New Zealand in the 19th Century

Historic Events for the Lamont family +