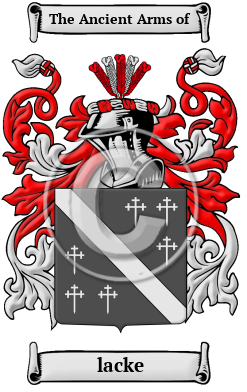 lacke is a name of ancient Anglo-Saxon origin and comes from the family once having lived beside or close to a lake. The surname lacke originally derived from the Old English word lacu which meant lake. lacke is a topographic surname, which was given to a person who resided near a physical feature such as a hill, stream, church, or type of tree.

Early Origins of the lacke family

The surname lacke was first found in Oxfordshire where William atte Lake was first registered in the Hundredorum Rolls of 1273. The same rolls included William de la Lake, Salop (Shropshire.) [1]

"The Lakes of Devonshire may take their name from a hamlet near Okehampton. In the 17th century the name was established in Bideford. There was a John Lake of Bideford in the reign of James I., and Thomas Lake in the time of William III. commanded one of the Bideford ships engaged in the Newfoundland trade. The name is still in the neighbourhood. A certain Roger de la Lake resided in the reign of Edward I. in the ancient Clifton Hundred of Devon." [2]

Some of the family were also found in nearby Cornwall. "Trevarrick, the residence of Henry Lakes, Esq. is in the vicinity of St. Austell, on its western side. It is a modern built house, and pleasantly situated. Behind it, on a winding hill, the trees which have been planted by its present possessor, thrive with much luxuriance; and the scenery around, though not extensive, is diversified with pleasing varieties." [3]

Early History of the lacke family

Sound was what guided spelling in the essentially pre-literate Middle Ages, so one person's name was often recorded under several variations during a single lifetime. Also, before the advent of the printing press and the first dictionaries, the English language was not standardized. Therefore, spelling variations were common, even among the names of the most literate people. Known variations of the lacke family name include Lake, Lacke and others.

Notables of this surname at this time include: Arthur Lake (1569-1626), and English prelate from Southampton, Bishop of Bath and Wells and a translator of the King James Version of The Bible; Sir Thomas Lake (1561-1630), Secretary of State to James I of England; and his son, Sir Arthur Lake (1598-1633), an English politician, known for the notorious Lake-Cecil feud which...
Another 61 words (4 lines of text) are included under the topic Early lacke Notables in all our PDF Extended History products and printed products wherever possible.

Migration of the lacke family to Ireland

Some of the lacke family moved to Ireland, but this topic is not covered in this excerpt. More information about their life in Ireland is included in all our PDF Extended History products and printed products wherever possible.

lacke migration to the United States +

For political, religious, and economic reasons, thousands of English families boarded ships for Ireland, Canada, the America colonies, and many of smaller tropical colonies in the hope of finding better lives abroad. Although the passage on the cramped, dank ships caused many to arrive in the New World diseased and starving, those families that survived the trip often went on to make valuable contributions to those new societies to which they arrived. Early immigrants bearing the lacke surname or a spelling variation of the name include:

lacke Settlers in United States in the 17th Century