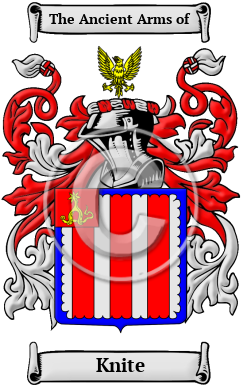 The Anglo-Saxon name Knite comes from when its first bearer worked as a knight, who was usually a feudal tenant deriving its origin from the Old English word cniht, which means knight. The word cniht also means servant and common soldier. Knighthood was established as a military profession by the 10th century. With the Norman Conquest and the resultant changes in the social order, knighthood became an established feudal rank, directly under that of a Baron. It was associated with the holding of land, but was not hereditary. Because land was hereditary and knighthood was not, there grew up a body of landless knights, who often banded together into military orders, such as the Knights Templar, and the Knights Hospitalers. As time went by, cavalry decreased in importance in warfare and the excesses of the Knights Templar brought the institution of knighthood into disrepute. The Knights Templar were suppressed by Pope Clement V in 1312. By the 16th century knighthood became a civil distinction.

Early Origins of the Knite family

The surname Knite was first found in Suffolk where one of the first records of the name was John le Cnitht who was listed in the Hundredorum Rolls of 1273. The same rolls also lists: Gilbert le Knyt in Cambridgeshire; Roger le Knith in Oxfordshire; and Ellis le Knyght in Wiltshire.

The surname was "well distributed over England south of a line drawn from the Humber to the Dee. In the northern part of England it is singularly rare. Sussex stands foremost for the number of its Knights, and after it come, in their order, Hants, Leicestershire and Rutland, and Gloucestershire. In Norfolk and Suffolk we have the form of Knights." [1]

The Yorkshire Poll Tax Rolls of 1379 list: Johannes Knyght; Willelmus Kneyte; Thomas Knycht: and Willelmus Knygth. [2] Some of the family were found in Scotland in early times. Robert dictus Knycht was burgess of Abirbrothoc and had a charter of a piece of land in Aberbrothoc in 1331. In 1435, John Knycht was canon of Brechin and rector of Funewyn (Finhaven.) He is probably the John Knycht who appears on an inquest on the lands of Tulloch in 1438. [3]

More recently some of the family held estates at Aston-Sub-Edge in Gloucestershire. "Norton-Burnt House, so called from the greater portion of it having been destroyed by fire while the seat of Sir William Knight, Bart., is the property of the Earl of Harrowby." [4]

Another branch was found at Letwell in the West Riding of Yorkshire. "The family seat of the Knights, here, an ancient house, was taken down by the late Mr. Gally Knight when he removed his residence, a few years since, to the mansion at Firbeck; but the offices, with the gardens and pleasure-grounds, in the latter of which is an extensive lake, are still remaining." [4]

To the far south and west in Stoke-Climsland, Cornwall, in early days the Knight family had a family seat at Aldren. [5]

Early History of the Knite family

Until quite recently, the English language has lacked a definite system of spelling rules. Consequently, Anglo-Saxon surnames are characterized by a multitude of spelling variations. Changes in Anglo-Saxon names were influenced by the evolution of the English language, as it incorporated elements of French, Latin, and other languages. Although Medieval scribes and church officials recorded names as they sounded, so it is common to find one person referred to by several different spellings of his surname, even the most literate people varied the spelling of their own names. Variations of the name Knite include Knight, Knights and others.

Distinguished members of the family include Sir William Knight, Ambassador to Maximilian; John Knight (died 1606), Scottish mariner and commander of an expedition off the coast of Greenland in 1605, he named Knight's Islands there; Sir John Knight (1612-1683), "the elder" an English merchant and politician, Member of Parliament for Bristol (1660), Mayor of Bristol; and his...
Another 56 words (4 lines of text) are included under the topic Early Knite Notables in all our PDF Extended History products and printed products wherever possible.

Migration of the Knite family

Searching for a better life, many English families migrated to British colonies. Unfortunately, the majority of them traveled under extremely harsh conditions: overcrowding on the ships caused the majority of the immigrants to arrive diseased, famished, and destitute from the long journey across the ocean. For those families that arrived safely, modest prosperity was attainable, and many went on to make invaluable contributions to the development of the cultures of the new colonies. Research into the origins of individual families in North America revealed records of the immigration of a number of people bearing the name Knite or a variant listed above: George Knight, who settled at Hingham in 1630; Ezekiel Knight settled in Salem Massachusetts in 1630; Giles Knight settled in Pennsylvania with his wife Mary and son Joseph in 1682.