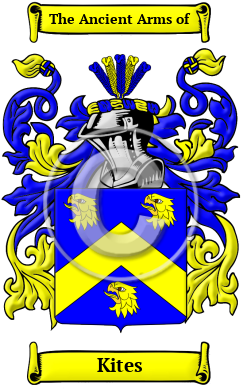 The name Kites is rooted in the ancient Anglo-Saxon culture. It was a name for someone who was a person who had acquired the nickname of the kite, which was originally derived from the Old English word cyta, referring to the "kite" the bird of prey. [1] [2] In this case the original bearer of the surname earned this name due to their wild, and high-spirited nature.

Early Origins of the Kites family

Early History of the Kites family

Kites has been spelled many different ways. Before English spelling became standardized over the last few hundred years, spelling variations in names were a common occurrence. As the English language changed in the Middle Ages, absorbing pieces of Latin and French, as well as other languages, the spelling of people's names also changed considerably, even over a single lifetime. Many variations of the name Kites have been found, including Kyte, Kite, Keyt, Keyte, Kight, Kyteson and others.

Distinguished members of the family include Robert "Ben" Kett, an English yeoman farmer in Norfolk who joined rebels as their leader in what was later to be known as Kett's Rebellion on July 8th 1549; he was later tried for treason and hanged from the walls of Norwich Castle on 7 December 1549. He "was a member of an old Norman family...
Another 62 words (4 lines of text) are included under the topic Early Kites Notables in all our PDF Extended History products and printed products wherever possible.

Migration of the Kites family to Ireland

Some of the Kites family moved to Ireland, but this topic is not covered in this excerpt.
Another 165 words (12 lines of text) about their life in Ireland is included in all our PDF Extended History products and printed products wherever possible.

Migration of the Kites family

In an attempt to escape the chaos experienced in England, many English families boarded overcrowded and diseased ships sailing for the shores of North America and other British colonies. Those families hardy enough, and lucky enough, to make the passage intact were rewarded with land and a social environment less prone to religious and political persecution. Many of these families became important contributors to the young colonies in which they settled. Early immigration and passenger lists have documented some of the first Kitess to arrive on North American shores: Ann Kite who settled in Virginia in 1660; John Kite settled in Virginia in 1656; Patience Kite settled in Charles Town, South Carolina in 1718; Charles and James Kite settled in Pennsylvania in 1773.