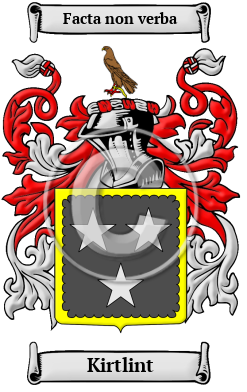 Kirtlint is an ancient Scottish name that was first used by the Strathclyde-Briton people of the Scottish/English Borderlands. It is a name for someone who lived in Cumberland, at Kirkland or in Lancashire at Kirkland. Both place names have essentially the same origin: "estate belonging to a church" having been derived from the Viking word "kirkja" + "land." Kirkland in Cumberland (Cumbria) was first recorded as Kyrkeland c. 1140. [1]

Early Origins of the Kirtlint family

The surname Kirtlint was first found in Cumberland, at Kirkland, a township, in the parish and union of Garstang, hundred of Amounderness as Homines de Kyrkelaund, recorded there during the reign of Edward I. [2] Later the parish of Kirkland in Lancashire was another family seat. "After the lapse of a century, it belonged to William de Kirkland, whose name was derived from his residence, and who died in 1363." [3] As one would expect having a close proximity to Scotland, Johannes filius John de Kyrkeland held land in the territory of Gordon, c. 1280 and later William de Kyrkland was burgess of Glasgow, 1424. Again in Glasgow, listed there was Alan de Kyrklande (1463) and John de Kirkland (1471.) [4]

Early History of the Kirtlint family

This web page shows only a small excerpt of our Kirtlint research. Another 108 words (8 lines of text) covering the years 1280, 1585, 1586, 1790 and are included under the topic Early Kirtlint History in all our PDF Extended History products and printed products wherever possible.

Prior to the first dictionaries, scribes spelled words according to sound. This, and the fact that Scottish names were repeatedly translated from Gaelic to English and back, contributed to the enormous number of spelling variations in Scottish names. Kirtlint has been spelled Kirkland, Kirkeland, Kirtland and others.

More information is included under the topic Early Kirtlint Notables in all our PDF Extended History products and printed products wherever possible.

Migration of the Kirtlint family to Ireland

Some of the Kirtlint family moved to Ireland, but this topic is not covered in this excerpt.
Another 50 words (4 lines of text) about their life in Ireland is included in all our PDF Extended History products and printed products wherever possible.

Migration of the Kirtlint family

In such difficult times, the difficulties of raising the money to cross the Atlantic to North America did not seem so large compared to the problems of keeping a family together in Scotland. It was a journey well worth the cost, since it was rewarded with land and freedom the Scots could not find at home. The American War of Independence solidified that freedom, and many of those settlers went on to play important parts in the forging of a great nation. Among them: Phillips and Nathaniel Kirkland settled in Lynn Massachusetts in 1635; John Kirkland settled in New Jersey in 1685; Charles and George Kirkland both arrived in Philadelphia in 1813 and 1832 respectively..