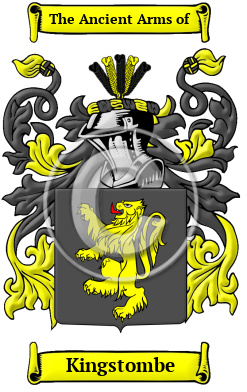 The name Kingstombe is part of the ancient legacy of the Anglo-Saxon tribes of Britain. It is a product of when the family lived on lands or manors known as royal settlements. These royal settlements or Cyninges-tun were located throughout various towns and parishes in England. The surname Kingstombe originally derived from the place of residence known in Old English as Cyninges-tun.

Early Origins of the Kingstombe family

The surname Kingstombe was first found in Yorkshire where they held a family seat from very early times. "The manor-house [of Miserden] is said to have been built with the materials of the castle, and was, with the manor and estates, the property of the Kingston family, and their usual residence prior to the reign of James I." [1] The township of West Thornton in Northumberland was home to another ancient branch of the family. " Between the township and the river Hart is a farm of about 100 acres, which belonged to the Knights Templars, from whom the hamlet obtained the name of Temple-Thornton: this property, on the suppression of the order, was consigned, with their other estates in the county, to John de Kingston." [1]

Early History of the Kingstombe family

The first dictionaries that appeared in the last few hundred years did much to standardize the English language. Before that time, spelling variations in names were a common occurrence. The language was changing, incorporating pieces of other languages, and the spelling of names changed with it. Kingstombe has been spelled many different ways, including Kingston, Kingstone, Kingstoun, Kingstown, Kingstoune and many more.

Notables of the family at this time include Sir William Kingston (died 1540), Constable of the Tower; he was of a Gloucestershire family, settled at Painswick; Sir Anthony Kingston (1519-1556), provost-marshal in Cornwall, Member of Parliament...
Another 35 words (2 lines of text) are included under the topic Early Kingstombe Notables in all our PDF Extended History products and printed products wherever possible.

Migration of the Kingstombe family to Ireland

Some of the Kingstombe family moved to Ireland, but this topic is not covered in this excerpt. More information about their life in Ireland is included in all our PDF Extended History products and printed products wherever possible.

Migration of the Kingstombe family

Thousands of English families in this era began to emigrate the New World in search of land and freedom from religious and political persecution. Although the passage was expensive and the ships were dark, crowded, and unsafe, those who made the voyage safely were rewarded with opportunities unavailable to them in their homeland. Research into passenger and immigration lists has revealed some of the very first Kingstombes to arrive in North America: Ellis Kingston who arrived in Virginia in 1607; followed by Elizabeth in 1670; James Kingston settled in Barbados in 1635; followed by John and his wife Phillis in 1679.