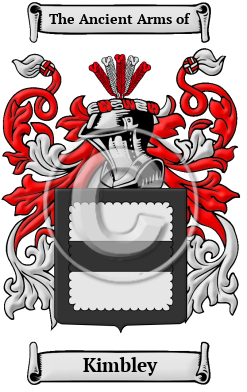 The origins of the name Kimbley are from the ancient Anglo-Saxon culture of Britain. It is derived from Buckinghamshire at either Great Kimble or Little Kimble, parishes in the union of Wycombe, hundred of Aylesbury. "[Great Kimble] according to old records, was anciently called Kunebel, from Cunobelin, or Cymbeline, the British king, whose sons here gallantly opposed the Romans, but were defeated, and one of them slain. There are still the remains of several intrenchments on the supposed field of battle; and on a circular mound in the neighbourhood are vestiges of a fortification termed Belinus' Castle, where it is said Cunobelin dwelt. " [1]

Both places are listed in the Domesday Book of 1086 collectively as Chenebelle, and literally meant "royal bell-shaped hill," from the Old English words "cyne" + "bell." [2]

Early Origins of the Kimbley family

The Hundredorum Rolls of 1273 had two entries for the family: Richard de Kinebell Buckinghamshire; and John de Kinebelle, Oxfordshire. [4]

In Norfolk, Nicholas Kymbell was listed there 3 Henry IV (during the third year of King Henry IV's reign.) [5]

Early History of the Kimbley family

Sound was what guided spelling in the essentially pre-literate Middle Ages, so one person's name was often recorded under several variations during a single lifetime. Also, before the advent of the printing press and the first dictionaries, the English language was not standardized. Therefore, spelling variations were common, even among the names of the most literate people. Known variations of the Kimbley family name include Kimball, Kimbell, Kimbel, Kemple, Kemble, Kimble and others.

Notables of the family at this time include Saint John Kemble (1599-1679), an English Roman Catholic martyr, one of the Forty Martyrs of England and Wales. He "appears to have been son of George Kemble of Longford, Herefordshire. He was ordained priest at Douay 23 Feb. 1625, and on 4 June was sent on the mission in Herefordshire. In 1678, at the time of the Popish plot, he was seized at Pembridge Castle, Herefordshire, where he was living as chaplain to the Scudamore family. He was tried at Hereford, convicted as having said mass at Pembridge, and executed at Widemarsh Common...
Another 256 words (18 lines of text) are included under the topic Early Kimbley Notables in all our PDF Extended History products and printed products wherever possible.

Kimbley migration to the United States +

For political, religious, and economic reasons, thousands of English families boarded ships for Ireland, the Canadas, the America colonies, and many of smaller tropical colonies in the hope of finding better lives abroad. Although the passage on the cramped, dank ships caused many to arrive in the New World diseased and starving, those families that survived the trip often went on to make valuable contributions to those new societies to which they arrived. Early immigrants bearing the Kimbley surname or a spelling variation of the name include:

Kimbley Settlers in United States in the 19th Century

Kimbley Settlers in United States in the 20th Century

Kimbley Settlers in Australia in the 19th Century