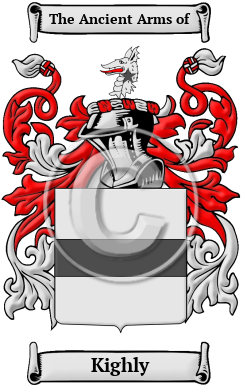 The name Kighly is of Anglo-Saxon origin and came from when a family lived in the settlement of Keighley in the West Riding of Yorkshire. The surname Kighly belongs to the large category of Anglo-Saxon habitation names, which are derived from pre-existing names for towns, villages, parishes, or farmsteads.

Early Origins of the Kighly family

The surname Kighly was first found in Yorkshire at Keighley, a market-town and parish, and the head of a union, in the E. division of the wapentake of Staincliffe and Ewcross. [1] The first listing of the place name was Chichelai in the Domesday Book of 1086. [2]

"This place, anciently Kyghelay, was for many generations the property of the Kyghelay family, who either gave their name to, or derived it from, the manor; and of whom Gilbertus Kyghelay, of Utley, was buried here in 1203, according to an inscription on a stone still remaining in the parish church. In the reign of Edward I. Henry de Kyghelay, a member of the family, obtained the grant of a weekly market and an annual fair, with privilege of free warren for the inhabitants." [1]

Early History of the Kighly family

Sound was what guided spelling in the essentially pre-literate Middle Ages, so one person's name was often recorded under several variations during a single lifetime. Also, before the advent of the printing press and the first dictionaries, the English language was not standardized. Therefore, spelling variations were common, even among the names of the most literate people. Known variations of the Kighly family name include Keightley, Keighley, Keitley, Keightly and others.

Distinguished members of the family include Thomas Keightley (1650-1719), an English courtier and official in Ireland, Vice-Treasurer of Ireland in 1686, Commissioner of the Irish Revenue (1692), progenitor of the family in Ireland. He was the "son of William Keightley (b. 1621) of Hertingfordbury, Hertfordshire, by his wife Anne, daughter of John Williams of London, whom he married in 1648 (Chester, Marriage Licenses, ed. Foster, p. 783). His paternal grandfather...
Another 69 words (5 lines of text) are included under the topic Early Kighly Notables in all our PDF Extended History products and printed products wherever possible.

Migration of the Kighly family to Ireland

Some of the Kighly family moved to Ireland, but this topic is not covered in this excerpt.
Another 111 words (8 lines of text) about their life in Ireland is included in all our PDF Extended History products and printed products wherever possible.

Migration of the Kighly family

For political, religious, and economic reasons, thousands of English families boarded ships for Ireland, the Canadas, the America colonies, and many of smaller tropical colonies in the hope of finding better lives abroad. Although the passage on the cramped, dank ships caused many to arrive in the New World diseased and starving, those families that survived the trip often went on to make valuable contributions to those new societies to which they arrived. Early immigrants bearing the Kighly surname or a spelling variation of the name include : William Keightley, who settled in Jamaica in 1661; Thomas Keightley settled in Newcastle Co. Del. in 1854; James, John, Maria, Robert, Samuel, Violetta, and William Keightly all arrived in Philadelphia between 1820 and 1878..