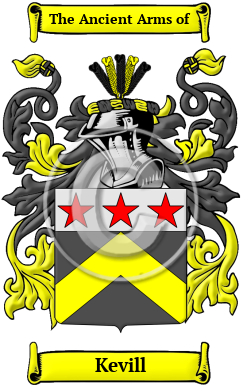 The name Kevill came to England with the ancestors of the Kevill family in the Norman Conquest of 1066. The Kevill family lived in the place named Keevil in the county of Wiltshire. The name was originally spelled Chivele in the Domesday Book. The territory of Chivele, including two mills, was granted to Anulf de Hesdine, who was a Norman Baron originally from Pas de Calais, in the canton of Hesdin. Hesdine was a tenant-in- chief in Keevil.

Early Origins of the Kevill family

The surname Kevill was first found in Wiltshire where they held a family seat from very ancient times, and were granted lands by William the Conqueror for their assistance at the Battle of Hastings in 1066. The name was originally spelt Chivele in the Domesday Book, [1] and the lands, including two mills, were granted to Anulf de Hesdine, a Norman Baron, originally from Pas de Calais, in the canton of Hesdin who was a tenant in chief holding Keevil in Wiltshire.

Early History of the Kevill family

This web page shows only a small excerpt of our Kevill research. Another 63 words (4 lines of text) covering the years 1580 and 1969 are included under the topic Early Kevill History in all our PDF Extended History products and printed products wherever possible.

It is only in the last few hundred years that the English language has been standardized. For that reason, Anglo-Norman surnames like Kevill are characterized by many spelling variations. Scribes and monks in the Middle Ages spelled names they sounded, so it is common to find several variations that refer to a single person. As the English language changed and incorporated elements of other European languages such as Norman French and Latin, even literate people regularly changed the spelling of their names. The variations of the name Kevill include Keevill, Keville, Kevell and others.

More information is included under the topic Early Kevill Notables in all our PDF Extended History products and printed products wherever possible.

Migration of the Kevill family to Ireland

Some of the Kevill family moved to Ireland, but this topic is not covered in this excerpt.
Another 32 words (2 lines of text) about their life in Ireland is included in all our PDF Extended History products and printed products wherever possible.

Kevill Settlers in Australia in the 19th Century

Kevill Settlers in New Zealand in the 19th Century