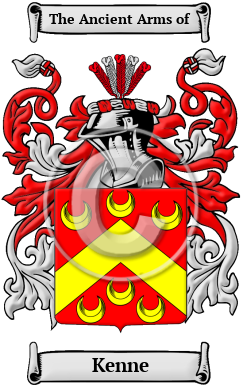 Cornwall in southwestern England provides the original birthplace of the surname Kenne. As populations grew, people began to assume an extra name to avoid confusion and to further identify themselves. Unlike most Celtic peoples, who favored patronymic names, the Cornish predominantly used local surnames. This was due to the heavy political and cultural influence of the English upon the Cornish People at the time that surnames first came into use. Local surnames were derived from where a person lived, held land, or was born. While many Cornish surnames of this sort appear to be topographic surnames, which were given to people who resided near physical features such as hills, streams, churches, or types of trees, many are actually habitation surnames derived from lost or unrecorded place names. The name Kenne history began in Devon or Somerset at the village of Kenn. Alternatively the name could have been a nickname as in "le ken" for one who keeps dogs derived from the Old French "chien."

Early Origins of the Kenne family

The surname Kenne was first found in Kenn in either Devon or Somerset. The latter, was "the place that was for many generations the property of the Ken family, of whose manorial residence, now modernised, the moat is still discernible. Thomas Ken, their descendant, was created Bishop of Bath and Wells by Charles II., and was one of the seven prelates sent to the Tower by James II." [1]

The Hundredorum Rolls of 1273 lists: Walter le Ken in Oxfordshire; Eborard le Ken in Cambridgeshire; and Thomas le Chene in Norfolk. Kirby's Quest lists both John de Ken and Walter de Ken in Somerset during the first year's reign of Edward I. [3] [4]

Early History of the Kenne family

Cornish surnames are characterized by a multitude of spelling variations. The frequent changes in surnames are due to the fact that the Old and Middle English languages lacked definite spelling rules. The official court languages, which were Latin and French, were also influential on the spelling of a surname. Since the spelling of surnames was rarely consistent in medieval times, and scribes and church officials recorded names as they sounded rather than adhering to any specific spelling rules, it was common to find the same individual referred to with different spellings of their surname in the ancient chronicles. Moreover, a large number of foreign names were brought into England, which accelerated and accentuated the alterations to the spelling of various surnames. Lastly, spelling variations often resulted from the linguistic differences between the people of Cornwall and the rest of England. The Cornish spoke a unique Brythonic Celtic language which was first recorded in written documents during the 10th century. However, they became increasingly Anglicized, and Cornish became extinct as a spoken language in 1777, although it has been revived by Cornish patriots in the modern era. The name has been spelled Kenn, Ken, Kenne and others.

More information is included under the topic Early Kenne Notables in all our PDF Extended History products and printed products wherever possible.

Kenne migration to the United States +

A search of the immigration and passenger lists has shown a number of people bearing the name Kenne:

Kenne Settlers in United States in the 19th Century