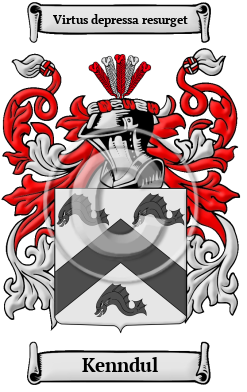 The illustrious surname Kenndul finds its origin in the rocky, sea swept coastal area of southwestern England known as Cornwall. Although surnames were fairly widespread in medieval England, people were originally known only by a single name. The process by which hereditary surnames were adopted is extremely interesting. As populations grew, people began to assume an extra name to avoid confusion and to further identify themselves. Under the Feudal System of government, surnames evolved and they often reflected life on the manor and in the field. Lords and their tenants often became known by the name of the feudal territory they owned or lived on. Unlike most Celtic peoples, who favored patronymic names, the Cornish predominantly used local surnames. This was due to the heavy political and cultural influence of the English upon the Cornish People at the time that surnames first came into use. Local surnames were derived from where a person lived, held land, or was born. While many Cornish surnames of this sort appear to be topographic surnames, which were given to people who resided near physical features such as hills, streams, churches, or types of trees, many are actually habitation surnames derived from lost or unrecorded place names. The name Kenndul is a local type of surname and the Kenndul family lived in Treworgy in Duloe. The parish of Kendall in Westmorland was home to many of the family. "On the east bank of the river are the ruins of a castle, the baronial seat of the lords of Kendal, and the birthplace of Catherine Parr, the last queen of Henry VIII." [1] "The manufacture of 'Kendal green' made this town early famous, and of necessity caused the surname to be common." [2] [3] However, another source disagrees with these sources. "The general opinion seems to be that this family is of different origin from that of the Kendalls of Westmorland, whose name is derived from Kirby-in-Kendale. Kendall signifies to see or behold the dale or valley; otherwise Kendall or Cendall is fine linen; and Cendale may be a corruption of Pendall, i. e. the head of the valley." [4]

Early Origins of the Kenndul family

The surname Kenndul was first found in Treworgy in Duloe, and are traced to Richard Kendall or Treworgy, Burgess for Lunceston in the forty-third of Edward III. For many centuries Pelyn was the family seat for this family. And it here that Walter, the third son of John Kendall of Treworgy married a daughter and coheir of Robert Holland, an illegitimate son of a Duke of Exeter. [5]

Early History of the Kenndul family

Notable amongst the family at this time was Nicholas Kendall (c. 1577-1643), an English politician who sat in the House of Commons in 1625 and 1640 killed in action fighting on the Royalist side in the English Civil War; and James Kendall (1647-1708), English soldier and...
Another 45 words (3 lines of text) are included under the topic Early Kenndul Notables in all our PDF Extended History products and printed products wherever possible.

Migration of the Kenndul family