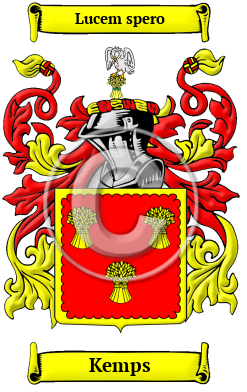 When the ancestors of the Kemps family arrived in England following the Norman Conquest of 1066, they brought their name with them. It is a name for a champion at jousting or wrestling. In medieval England, the joust was used to train feudal knights for battle. Checking further we found the name was derived from the Middle English word kempe, which is a derivative of the Old English word cempa, which means warrior or champion. [1]

Early Origins of the Kemps family

The surname Kemps was first found in Wiltshire, where one of the first records of the name was Eadulf Cempa in 902. Years later, Edmund Kempe was listed in Norfolk c. 1100 and Ralph le Kemp was listed in the Subsidy Rolls of 1296 in Sussex. [1]

The Hundredorum Rolls of 1273 list Alan Kempe in Suffolk and William Kempe in Oxfordshire. The Yorkshire Poll Tax Rolls of 1379 list Ricardus Kempe and Johannes Kempe. [2]

The parish of Slindon in Sussex was of great significance to the family. "Slindon House, the seat of the Countess Dowager of Newburgh, was originally built by one of the archbishops of Canterbury, and was for some time the residence of the celebrated Archbishop Langton, who died here in the reign of Henry III.; the present mansion, erected by Sir George Kemp in the reign of Elizabeth, is a handsome structure, on a bold eminence." [3]

The parish of Wye in Kent was another ancient family seat. "The church was rebuilt by John Kemp, a native of the parish, who was first preferred to the bishopric of Rochester, and, having successively presided over several other sees, was lastly translated to the archbishopric of Canterbury and made cardinal. In 1447, he founded a college here for a master, or provost, and Secular canons, dedicated to St. Gregory and St. Martin. Olantigh, in the parish, was formerly the seat of the family of Kemp, and is supposed to have been the birthplace of Archbishop Kemp, and also of his nephew, Thomas Kemp, Bishop of London." [3]

In the far south in the parish of St. Ewe in Cornwall, another branch of the family was found. "What now remains of Trevithick is turned into a farm house, and is the property of Arthur Kempe, Esq. admiral of the blue." [4]

Early History of the Kemps family

Endless spelling variations are a prevailing characteristic of Norman surnames. Old and Middle English lacked any definite spelling rules, and the introduction of Norman French added an unfamiliar ingredient to the English linguistic stew. French and Latin, the languages of the court, also influenced spellings. Finally, Medieval scribes generally spelled words according to how they sounded, so one person was often referred to by different spellings in different documents. The name has been spelled Kemp, Kempe and others.

Outstanding amongst the family at this time was Cardinal John Kemp (c.1380-1454), Archbishop of Canterbury, and Lord Chancellor of England; Will Kemp who was an actor with the Lord Chamberlain's Men from 1594 to 1599, and was listed as one of...
Another 40 words (3 lines of text) are included under the topic Early Kemps Notables in all our PDF Extended History products and printed products wherever possible.

Migration of the Kemps family to Ireland

Some of the Kemps family moved to Ireland, but this topic is not covered in this excerpt.
Another 50 words (4 lines of text) about their life in Ireland is included in all our PDF Extended History products and printed products wherever possible.

Kemps migration to the United States +

To escape the political and religious persecution within England at the time, many English families left for the various British colonies abroad. The voyage was extremely difficult, though, and the cramped, dank ships caused many to arrive in the New World diseased and starving. But for those who made it, the trip was most often worth it. Many of the families who arrived went on to make valuable contributions to the emerging nations of Canada and the United States. An inquiry into the early roots of North American families reveals a number of immigrants bearing the name Kemps or a variant listed above:

Kemps Settlers in United States in the 18th Century

Kemps Settlers in United States in the 19th Century