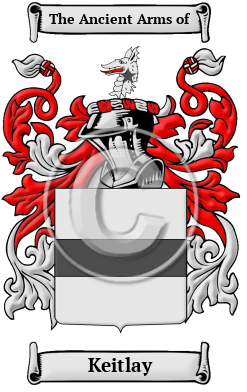 Of all the Anglo-Saxon names to come from Britain, Keitlay is one of the most ancient. The name is a result of the original family having lived in the settlement of Keighley in the West Riding of Yorkshire. The surname Keitlay belongs to the large category of Anglo-Saxon habitation names, which are derived from pre-existing names for towns, villages, parishes, or farmsteads.

Early Origins of the Keitlay family

The surname Keitlay was first found in Yorkshire at Keighley, a market-town and parish, and the head of a union, in the E. division of the wapentake of Staincliffe and Ewcross. [1] The first listing of the place name was Chichelai in the Domesday Book of 1086. [2]

"This place, anciently Kyghelay, was for many generations the property of the Kyghelay family, who either gave their name to, or derived it from, the manor; and of whom Gilbertus Kyghelay, of Utley, was buried here in 1203, according to an inscription on a stone still remaining in the parish church. In the reign of Edward I. Henry de Kyghelay, a member of the family, obtained the grant of a weekly market and an annual fair, with privilege of free warren for the inhabitants." [1]

Early History of the Keitlay family

The first dictionaries that appeared in the last few hundred years did much to standardize the English language. Before that time, spelling variations in names were a common occurrence. The language was changing, incorporating pieces of other languages, and the spelling of names changed with it. Keitlay has been spelled many different ways, including Keightley, Keighley, Keitley, Keightly and others.

Distinguished members of the family include Thomas Keightley (1650-1719), an English courtier and official in Ireland, Vice-Treasurer of Ireland in 1686, Commissioner of the Irish Revenue (1692), progenitor of the family in Ireland. He was the "son of William Keightley (b. 1621) of Hertingfordbury, Hertfordshire, by his wife Anne, daughter of John Williams of London, whom he married in 1648 (Chester, Marriage Licenses, ed. Foster, p. 783). His paternal grandfather...
Another 69 words (5 lines of text) are included under the topic Early Keitlay Notables in all our PDF Extended History products and printed products wherever possible.

Migration of the Keitlay family to Ireland

Some of the Keitlay family moved to Ireland, but this topic is not covered in this excerpt.
Another 111 words (8 lines of text) about their life in Ireland is included in all our PDF Extended History products and printed products wherever possible.

Migration of the Keitlay family

Thousands of English families in this era began to emigrate the New World in search of land and freedom from religious and political persecution. Although the passage was expensive and the ships were dark, crowded, and unsafe, those who made the voyage safely were rewarded with opportunities unavailable to them in their homeland. Research into passenger and immigration lists has revealed some of the very first Keitlays to arrive in North America: William Keightley, who settled in Jamaica in 1661; Thomas Keightley settled in Newcastle Co. Del. in 1854; James, John, Maria, Robert, Samuel, Violetta, and William Keightly all arrived in Philadelphia between 1820 and 1878..