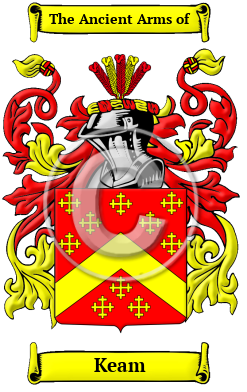 Keam is a name that first reached England following the Norman Conquest of 1066. The Keam family lived in Lincolnshire. The surname comes from one of two places in Lincolnshire which bear the name Kyme: South Kyme and North Kyme, both in the vicinity of Tattershall.

Early Origins of the Keam family

The surname Keam was first found in Lincolnshire where they held a family seat as Lords of the Manor of Kestevan. At the time of the taking of the Domesday Book census in 1086 initiated by Duke William of Normandy after his conquest of England in 1066, the holdings are not shown but later, within the next century, it was recorded as the Honour of Kymes. [1] "This parish, which is situated on that part of the Sleaford navigation called Kyme Eau, derived its name from the Kyme family, who were barons by tenure and writ in the reign of Stephen, and had a seat here, mentioned by Leland as a 'goodly house and park,' of which only the tower now remains." [2] Sir William, the founder of the family, also founded the Priory of Bolinton about 1135. "The Kymes assumed the surname from a fair lordship, the principal place of their residence in Kesteven. " [3] Sir Philip de Kyme was the first officially recorded, succeeded by his son Sir William de Kyme. Sir Philip was Baron Kyme, Lord of the Manor, and was summoned to Parliament in 1295-1313 to represent Lincolnshire. Sir William was summoned to Parliament in 1323-1336.

Early History of the Keam family

This web page shows only a small excerpt of our Keam research. Another 131 words (9 lines of text) covering the years 1100, 1160, 1530 and 1463 are included under the topic Early Keam History in all our PDF Extended History products and printed products wherever possible.

It is only in the last few hundred years that the English language has been standardized. For that reason, Anglo-Norman surnames like Keam are characterized by many spelling variations. Scribes and monks in the Middle Ages spelled names they sounded, so it is common to find several variations that refer to a single person. As the English language changed and incorporated elements of other European languages such as Norman French and Latin, even literate people regularly changed the spelling of their names. The variations of the name Keam include Kimes, Kymes, Kyme, Kime and others.

More information is included under the topic Early Keam Notables in all our PDF Extended History products and printed products wherever possible.

Keam Settlers in New Zealand in the 19th Century