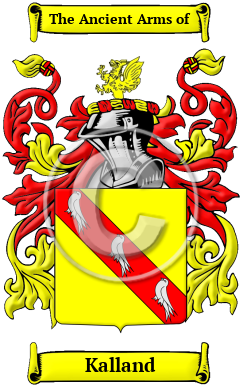 The name Kalland comes from the Irish Gaelic O Cathalain. The Gaelic versions of today's Irish names demonstrate a link to a proud, ancient past. The name is possibly derived from Cathalan, king of Farney slain in 1028, whose name means Little Charles, and from whom the family is thought to have descended. Cathalan was in turn descended from Coleman Mor, the king of Meath and (the 133rd Monarch of Ireland).

Early Origins of the Kalland family

The surname Kalland was first found in County Roscommon (Irish: Ros Comáin) located in central Ireland in the province of Connacht, where they held a family seat from very ancient times.

Caillin ( fl. 560), was an Irish saint, "son of Niata, descended from Rudraighe, whose grandson, Fergus Mac Roigh, flourished at the beginning of the Christian era. His mother was Deighe, granddaughter of Dubhthach, chief poet of King Laogaire in the time of St. Patrick. The authority for the history of St. Caillin is the ancient ‘Book of Fenagh,’ a series of poetical rhapsodies, written about 1400, a copy of which with a connecting narrative in prose was made in 1516. we may gather the following facts of St. Caillin's history from this curious repertory of ancient traditions: ‘The descendants of Medbh and Fergus, viz. the children of Conmac, Ciar, and Corc, grew and multiplied throughout Ireland. The children of Conmac especially were in Connaught.’ Those were the Conmaicne of Dunmor, kinsmen of Caillin's. Resolved to remedy the congestion of the population by killing each other, the Conmaicne would no doubt have carried out their plan but for the interference of St. Caillin. By the advice of an angel they sent messengers to him at Rome, whither he had gone for his education." [1]

Early History of the Kalland family

This web page shows only a small excerpt of our Kalland research. Another 149 words (11 lines of text) covering the years 1027 and 1280 are included under the topic Early Kalland History in all our PDF Extended History products and printed products wherever possible.

Just like the English language, the Gaelic language of Ireland was not standardized in the Middle Ages. Therefore, one's name was often recorded under several different spellings during the life of its bearer. Spelling variations revealed in the search for the origins of the Kalland family name include Callan, Callanan, Caillan, Calan, Calanan, Callen, Callin, Callon, Callinan, Callinon and many more.

More information is included under the topic Early Kalland Notables in all our PDF Extended History products and printed products wherever possible.

Kalland migration to the United States +

Ireland became inhospitable for many native Irish families in the 19th centuries. Poverty, lack of opportunities, high rents, and discrimination forced thousands to leave the island for North America. The largest exodus of Irish settlers occurred with the Great Potato Famine of the late 1840s. For these immigrants the journey to British North America and the United States was long and dangerous and many did not live to see the shores of those new lands. Those who did make it were essential to the development of what would become two of the wealthiest and most powerful nations of the world. These Irish immigrants were not only important for peopling the new settlements and cities, they also provided the manpower needed for the many industrial and agricultural projects so essential to these growing nations. Immigration and passenger lists have documented the arrival of various people bearing the name Kalland to North America:

Kalland Settlers in United States in the 19th Century

Kalland Settlers in United States in the 20th Century