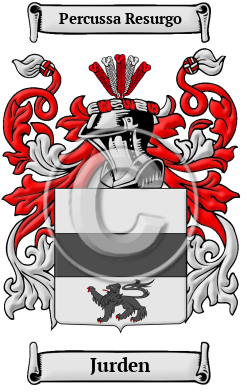 The Jurden name comes from the Gaelic Mac Siúrtáin. It was adopted by one a Connacht family who came to Ireland with the Norman invasion of 1172. Ultimately, Jurden is derived from the name of the river Jordan, "Yarden" in Hebrew. The name first became popular in Europe as a personal name during the Crusades when it was a common practice for Crusaders to bring back vials containing the waters of this river to use in the baptism of their children.

Early Origins of the Jurden family

The surname Jurden was first found in Normandy where the name there was recorded as Jordanus as in the listing of Richard, Rovert and William Jordanus in 1189. [1]

As to underline this origin, the learned Edward MacLysaght, noted "Mac Siurtáin A Gaelic patronymic adopted by the d' Exeter family-one of those which acquired estates in Connacht after the Anglo-Norman invasion; it was later called MacJordan's country." [2]

Early History of the Jurden family

This web page shows only a small excerpt of our Jurden research. Another 83 words (6 lines of text) covering the years 1641 and 1652 are included under the topic Early Jurden History in all our PDF Extended History products and printed products wherever possible.

During the lifetime of an individual person, his name was often spelt by church officials and medieval scribes the way it sounded. An examination of the many different origins of each name has revealed many spelling variations for the name: Jordan, Jordane, Jordain, Jordaine, Jourdan, Jourdane, Jorden, Jurden, Jurdon, MacShurtan, MacJordan, MacShurton, MacShurdane, MacShurtaine,McShurtan, McJordan, McShurton, McShurdane and many more.

More information is included under the topic Early Jurden Notables in all our PDF Extended History products and printed products wherever possible.

Jurden migration to the United States +

Ireland's Great Potato Famine left the country's inhabitants in extreme poverty and starvation. Many families left their homeland for North America for the promise of work, freedom and land ownership. Although the Irish were not free of economic and racial discrimination in North America, they did contribute greatly to the rapid development of bridges, canals, roads, and railways. Eventually, they would be accepted in other areas such as commerce, education, and the arts. An examination of immigration and passenger lists revealed many bearing the name Jurden:

Jurden Settlers in United States in the 17th Century