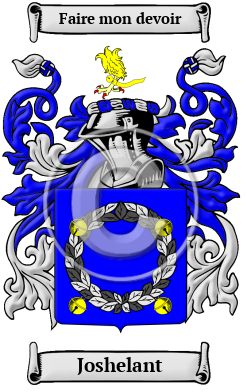 The notable Joshelant family arose among the Cornish People, a race with a rich Celtic heritage and an indomitable fighting spirit who inhabited the southwest of England. While surnames were well-known during the English medieval period, Cornish People originally used only a single name. The way in which hereditary surnames came into common use is interesting. As the population of medieval Europe multiplied, people began to assume an extra name to avoid confusion and to further identify themselves. Under the Feudal System of government, surnames evolved and they often reflected life on the manor and in the field. Patronymic surnames were derived from given names and were the predominant type of surname among the Celtic peoples of Britain. However, the people of Cornwall provide a surprising exception to this rule, and patronymic surnames are less common among them than other people of Celtic stock, such as their Welsh neighbors. This is due to the greater influence of English bureaucracy and naming practices in Cornwall at the time that surnames first arose. This type of surname blended perfectly with the prevailing Feudal System. One feature that is occasionally found in Cornish surnames of this type is the suffix -oe or -ow; this is derived from the Cornish plural suffix -ow. is a patronymic surname that came from the Germanic personal name Jocelyn, meaning Goth.

Early Origins of the Joshelant family

The surname Joshelant was first found in Lanarkshire but one of the first records of the name was Josceline de Bohon (or Joscelyn fitz Richard de Bohon or Joscelin de Bohun) (c. 1111-1184) who was Bishop of Salisbury. His son, Reginald fitz Jocelin (sometimes Reginald Italus, Richard the Lombard, or Reginald Lombardus) was Bishop of Bath and an Archbishop of Canterbury-elect. Jocelin (or Jocelyn) (died 1199) was a twelfth-century Cistercian monk and cleric who became the 4th Abbot of Melrose and later Bishop of Glasgow, Scotland. Another branch was seated at Sempringham in Lincolnshire by grant of William the Conqueror. [2]

Early History of the Joshelant family

Notable amongst the family at this time was John Josselyn or Jastleyn (c.1490-1553), an English politician. Elizabeth Jocelin (1596-1623), was author of 'The Mother's Legacie to her Unborne Childe,' born in 1596, and was the daughter of Sir Richard Brooke of Norton, Cheshire, and his wife Joan. [1] Ralph Josselin (1616-1683) was an English vicar of Earls Colne in Essex...
Another 57 words (4 lines of text) are included under the topic Early Joshelant Notables in all our PDF Extended History products and printed products wherever possible.

Migration of the Joshelant family to Ireland

Some of the Joshelant family moved to Ireland, but this topic is not covered in this excerpt.
Another 94 words (7 lines of text) about their life in Ireland is included in all our PDF Extended History products and printed products wherever possible.

Migration of the Joshelant family

An examination into the immigration and passenger lists has discovered a number of people bearing the name Joshelant: Henry Jocelyn settled in New Hampshire in 1630.