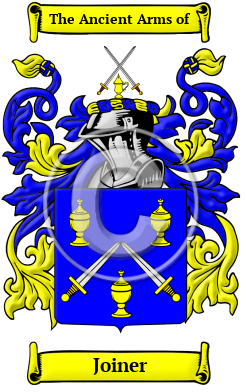 The distinguished surname Joiner was first brought to England in the wake of the Norman Conquest of 1066. The name is derived from the Old French "engigneor" or "enginior," meaning "engineer, maker of military machines." During the 12th century, the term "ingeniator" was used to refer to men who worked as both master-mason and architect. [1]

The Joyner variant is "an occupative term came into use somewhat later than carpenter." [2] Waldinus Ingeniator (the engineer) occurs in the Domesday Book of Lincolnshire, as a tenant in chief. [3]

Early Origins of the Joiner family

The surname Joiner was first found in Yorkshire during the 12th century. The first recorded bearer of the name was Ailnoth Ingeniator, a military architect who served as surveyor of royal buildings in 1157. He supervised building operations at Windsor between 1166 and 1173, repaired Westminster Abbey after a fire, and headed the destruction of Framlingham and Walton Castles. [4]

Other early bearers of the name include Richard Lenginnur, recorded in the Pipe Rolls of Yorkshire between 1191 and 1197, and William Enginur, who was living in Suffolk in 1202. The Hundredorum Rolls of 1273 list Hugh le Ginnur in Oxfordshire and William le Engynur in Suffolk. [2] William Joynier was Lord Mayor of London in 1239.

Records in Scotland are very scarce, but here the name is a "variant of Jenner, influenced by the occupative name 'joiner.' Alexander Joyner in Aberdeen, 1798. As far as the Jenner variant is concerned, the first on record here was Anneys la Gynnere del counte de Berewyk who rendered homage to King Edward I of England in 1296. "In 1392 there is reference to the tenement of Alan Gynowr in Edinburgh, Patrik Genour held lands in Inverness in 1452, umquhile Thomas Genor is referred to in 1492, Donald Jenor, 'legislator,' is mentioned in 1499, William Genour was tenant of the Casteltoun, Ardmanoch in 1504." [5]

Early History of the Joiner family

The name Joiner, appeared in many references, and from time to time, the surname was spelt Jenner, Joyner, Joiner, Junor, Junior, Genner, Ginner, Genower and many more.

Notable amongst the family name during their early history was David Jenner (died 1691), an English clergyman and controversialist, educated at Trinity College, Cambridge. "Afterwards he became a fellow of Sidney Sussex College, and took the degree of M.A. by royal mandate in 1662, and that of B.D., also by royal mandate, in 1668. He was installed in the prebend of Netherbury in the cathedral church of Salisbury 28 June 1676, and was instituted on 15 Oct. 1678 to the rectory of Great Warley, Essex, which he resigned in or about October 1687. He was likewise chaplain to the king. He...
Another 137 words (10 lines of text) are included under the topic Early Joiner Notables in all our PDF Extended History products and printed products wherever possible.

In the United States, the name Joiner is the 1,580th most popular surname with an estimated 19,896 people with that name. [6]

Joiner migration to the United States +

The New World beckoned as many of the settlers in Ireland, known as the Scotch/Irish, became disenchanted. They sailed aboard the armada of sailing ships known as the "White Sails" which plied the stormy Atlantic. Some called them, less romantically, the "coffin ships." Amongst the early settlers who could be considered kinsmen of the Joiner family, or who bore a variation of the surname Joiner were

Joiner Settlers in United States in the 17th Century

Joiner Settlers in United States in the 18th Century

Joiner Settlers in United States in the 19th Century

Joiner Settlers in Canada in the 19th Century

Joiner Settlers in Australia in the 19th Century

Joiner Settlers in New Zealand in the 19th Century

Historic Events for the Joiner family +

Suggested Readings for the name Joiner +