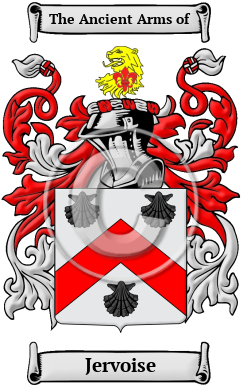 Jervoise is one of the thousands of new names that the Norman Conquest of 1066 brought to England. It comes from the Norman personal name Gervase. The surname Gervais indicates that the bearer is a descendant of someone named Gervase. [1]

Gervase of Canterbury (Gervasius Dorobornensis) (fl. 1188), was an English "chronicler, was born, apparently of a Kentish family, about 1141. As he had a brother Thomas in his monastery, who is conjectured to be identical with one Thomas of Maidstone, we have a possible clue to his birthplace; but the information is too imperfect to warrant more than an hypothesis. Gervase became a monk of Christ Church, Canterbury, on the first Saturday in Lent, 16 Feb. 1163." [2]

Early Origins of the Jervoise family

The surname Jervoise was first found in Cornwall. The Gervais surname also spelled Jarvis, Gervays and Gervis, was first found in Mobonnaiss and Vallee, in Brettagne, the ancient name for Brittany, and arrived in England with William, Duke of Normandy, in 1066. [3]

Early History of the Jervoise family

Outstanding amongst the family at this time was John Gervais, (died 1268), an early English clergyman, Bishop of Carlisle in 1262 and Bishop of Winchester (1262-1268); Richard Gervays (died c.1410), of Canterbury, Kent, an English politician, a Member of...
Another 38 words (3 lines of text) are included under the topic Early Jervoise Notables in all our PDF Extended History products and printed products wherever possible.

Migration of the Jervoise family to Ireland

Some of the Jervoise family moved to Ireland, but this topic is not covered in this excerpt.
Another 229 words (16 lines of text) about their life in Ireland is included in all our PDF Extended History products and printed products wherever possible.

Migration of the Jervoise family

Because of the political and religious discontent in England, families began to migrate abroad in enormous numbers. Faced with persecution and starvation at home, the open frontiers and generally less oppressive social environment of the New World seemed tantalizing indeed to many English people. The trip was difficult, and not all made it unscathed, but many of those who did get to Canada and the United States made important contributions to the young nations in which they settled. Some of the first North American settlers with Jervoise name or one of its variants: John Jarvis who landed in Salem Massachusetts in 1630 and Thomas Gervais who settled in Maryland in 1634; Robert Jervis settled in Virginia in 1660; Richard Jervis settled in Maryland in 1720.