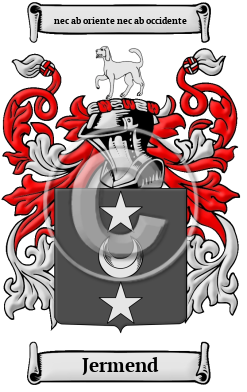 Jermend is a name that dates far back into the mists of early British history to the days of the Anglo-Saxon tribes. It is derived from the baptismal name German. The surname Jermend referred to the son of German which belongs to the category of patronymic surnames. In Old English, patronyms were formed by adding a variety of suffixes to personal names, which changed over time and from place to place. For example, after the Norman Conquest, sunu and sune, which meant son, were the most common patronymic suffixes. In the 12th and 13th centuries, the most common patronymic names included the word filius, which meant son. By the 14th century, the suffix son had replaced these earlier versions. Surnames that were formed with filius or son were more common in the north of England and it was here that the number of individuals without surnames was greatest at this time.

Early Origins of the Jermend family

The surname Jermend was first found in the Domesday Book of 1086 where the original Latin form of the name Germanus was first listed. [1]

Early History of the Jermend family

It is only in the last few hundred years that the English language has been standardized. For that reason, early Anglo-Saxon surnames like Jermend are characterized by many spelling variations. As the English language changed and incorporated elements of other European languages, even literate people changed the spelling of their names. The variations of the name Jermend include: Jarman, Jarmain, Jermayne, Jermain, Jermyn, Jermin and many more.

Notables of this surname at this time include: Sir Ambrose Jermyn; his son, Sir Robert Jermyn DL (1539-1614) was an English politician, High Sheriff of Suffolk for 1579; Sir Thomas Jermyn (1573-1645) was an English politician, Member of Parliament for Andover (1604-1611), and Bury St Edmunds (1614-1629); and Henry Jermyn, 1st Earl of Saint Albans, KG (1605-1684), an English politician and courtier. He was second son of Sir Thomas Jermyn, knt., by Mary Barber. In 1624 Jermyn was gentleman in attendance on the embassy to Paris, and in 1628 he represented Liverpool in parliament. On 2 July 1628 he was appointed...
Another 235 words (17 lines of text) are included under the topic Early Jermend Notables in all our PDF Extended History products and printed products wherever possible.

Migration of the Jermend family to Ireland

Some of the Jermend family moved to Ireland, but this topic is not covered in this excerpt. More information about their life in Ireland is included in all our PDF Extended History products and printed products wherever possible.

Migration of the Jermend family

Many English families tired of political and religious strife left Britain for the new colonies in North America. Although the trip itself offered no relief - conditions on the ships were extremely cramped, and many travelers arrived diseased, starving, and destitute - these immigrants believed the opportunities that awaited them were worth the risks. Once in the colonies, many of the families did indeed prosper and, in turn, made significant contributions to the culture and economies of the growing colonies. An inquiry into the early roots of North American families has revealed a number of immigrants bearing the name Jermend or a variant listed above: John, his wife Margaret, Elizabeth, Sarah, Priscilla Jarman settled in New England in 1635; John Jermain settled in Virginia in 1739; Thomas Jermayne settled in St. Christopher in 1634.