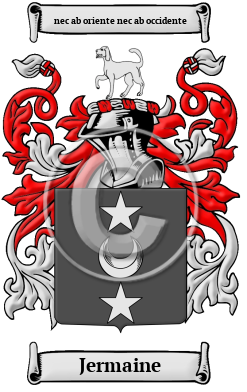 The generations and branches of the Jermaine family share a name that has its roots in the ancient Anglo-Saxon culture of Britain. The name Jermaine comes from the baptismal name German. The surname Jermaine referred to the son of German which belongs to the category of patronymic surnames. In Old English, patronyms were formed by adding a variety of suffixes to personal names, which changed over time and from place to place. For example, after the Norman Conquest, sunu and sune, which meant son, were the most common patronymic suffixes. In the 12th and 13th centuries, the most common patronymic names included the word filius, which meant son. By the 14th century, the suffix son had replaced these earlier versions. Surnames that were formed with filius or son were more common in the north of England and it was here that the number of individuals without surnames was greatest at this time.

Early Origins of the Jermaine family

The surname Jermaine was first found in the Domesday Book of 1086 where the original Latin form of the name Germanus was first listed. [1]

Early History of the Jermaine family

Until quite recently, the English language has lacked a definite system of spelling rules. Consequently, Anglo-Saxon surnames are characterized by a multitude of spelling variations. Changes in Anglo-Saxon names were influenced by the evolution of the English language, as it incorporated elements of French, Latin, and other languages. Although Medieval scribes and church officials recorded names as they sounded, so it is common to find one person referred to by several different spellings of his surname, even the most literate people varied the spelling of their own names. Variations of the name Jermaine include Jarman, Jarmain, Jermayne, Jermain, Jermyn, Jermin and many more.

Notables of this surname at this time include: Sir Ambrose Jermyn; his son, Sir Robert Jermyn DL (1539-1614) was an English politician, High Sheriff of Suffolk for 1579; Sir Thomas Jermyn (1573-1645) was an English politician, Member of Parliament for Andover (1604-1611), and Bury St Edmunds (1614-1629); and Henry Jermyn, 1st Earl of Saint Albans, KG (1605-1684), an English politician and courtier. He was second son of Sir Thomas Jermyn, knt., by Mary Barber. In 1624 Jermyn was gentleman in attendance on the embassy to Paris, and in 1628 he represented Liverpool in parliament. On 2 July 1628 he was appointed...
Another 235 words (17 lines of text) are included under the topic Early Jermaine Notables in all our PDF Extended History products and printed products wherever possible.

Migration of the Jermaine family to Ireland

Some of the Jermaine family moved to Ireland, but this topic is not covered in this excerpt. More information about their life in Ireland is included in all our PDF Extended History products and printed products wherever possible.

Migration of the Jermaine family

Searching for a better life, many English families migrated to British colonies. Unfortunately, the majority of them traveled under extremely harsh conditions: overcrowding on the ships caused the majority of the immigrants to arrive diseased, famished, and destitute from the long journey across the ocean. For those families that arrived safely, modest prosperity was attainable, and many went on to make invaluable contributions to the development of the cultures of the new colonies. Research into the origins of individual families in North America revealed records of the immigration of a number of people bearing the name Jermaine or a variant listed above: John, his wife Margaret, Elizabeth, Sarah, Priscilla Jarman settled in New England in 1635; John Jermain settled in Virginia in 1739; Thomas Jermayne settled in St. Christopher in 1634.