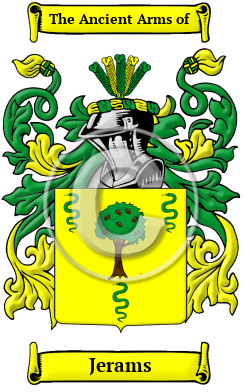 Jerams is one of the names carried to England in the great wave of migration from Normandy following the Norman Conquest in 1066. It is based on the Old French given name Jerome, which itself was originally derived from the Greek name Hieronymos. The Greek name was composed of the elements hieros, which means sacred, and onyma, which means name. [1]

Early Origins of the Jerams family

The surname Jerams was first found in Berkshire where the first record of the Jerams family was as an early spelling as a forename, German Curzun who was listed there in 1206. The Curia Regis Rolls also included Jeronimus, Geronimus, Gerarmus de Curzun in Berkshire and Staffordshire (1206-1211.) A few years later, Jerom' de Ponte Burgi was found in the Assize Rolls for Yorkshire in 1219 and later again, Jeronimus de Normaneby was listed in the Pipe Rolls for Lincolnshire in 1230. [2]

Early History of the Jerams family

Spelling variations in names were a common occurrence in the eras before English spelling was standardized a few hundred years ago. In the Middle Ages, even the literate regularly changed the spellings of their names as the English language incorporated elements of French, Latin, and other European languages. Many variations of the name Jerams have been found, including Jerome, Jerrome, Jerram, Jeran, Jarrom, Jerrems, Gerome, Gerram and many more.

Distinguished members of the family include Stephen Jerome (fl. 1604-1650), an English miscellaneous writer, was educated at St. John's College, Cambridge, where he proceeded B.A. in 1604, and M.A. in 1607. In 1619 he was a preacher at St. Nicholas's Church, Newcastle (cf. Ambrose Barnes, Memoirs, p. 305, Surtees Society). Writing from Ireland in 1624, he describes himself as ‘domesticke chaplain to the Rt...
Another 63 words (4 lines of text) are included under the topic Early Jerams Notables in all our PDF Extended History products and printed products wherever possible.

Migration of the Jerams family to Ireland

Some of the Jerams family moved to Ireland, but this topic is not covered in this excerpt. More information about their life in Ireland is included in all our PDF Extended History products and printed products wherever possible.

Migration of the Jerams family

For many English families, the social climate in England was oppressive and lacked opportunity for change. For such families, the shores of Ireland, Australia, and the New World beckoned. They left their homeland at great expense in ships that were overcrowded and full of disease. Many arrived after the long voyage sick, starving, and without a penny. But even those were greeted with greater opportunity than they could have experienced back home. Numerous English settlers who arrived in the United States and Canada at this time went on to make important contributions to the developing cultures of those countries. Many of those families went on to make significant contributions to the rapidly developing colonies in which they settled. Early North American records indicate many people bearing the name Jerams were among those contributors: William Jerome, who sailed to New Orleans in 1820; William Jerroms and Joseph Jerome to New York in 1830; and R.L. Jerome to San Francisco in 1851.