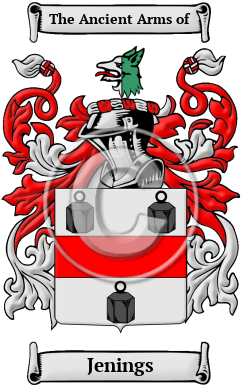 The ancient surname Jenings came from The name Jenings is derived from the personal name John, or perhaps more accurately from several diminutions of the name John, such as Jan, Jon, or Jen. [1]

Early Origins of the Jenings family

Early History of the Jenings family

Notable of this family during the Middle Ages was Sir Stephen Jenyns (c.?1450-1523), English wool merchant from Wolverhampton who became Sheriff of London in 1499, before becoming Lord Mayor of London in 1509. Saint Edmund Gennings (1567-1591), was an English Catholic martyr, who was executed during the English Reformation. He was born in 1567 at Lichfield and brought up in the Protestant religion. He became a page in the service of Richard Sherwood, a Catholic gentleman, who afterwards went to Rheims and took holy orders. [4] John Gennings (c. 1570-1660), was an Englishman who was converted to Catholicism through the martyrdom of his...
Another 124 words (9 lines of text) are included under the topic Early Jenings Notables in all our PDF Extended History products and printed products wherever possible.

Migration of the Jenings family to Ireland

Some of the Jenings family moved to Ireland, but this topic is not covered in this excerpt.
Another 66 words (5 lines of text) about their life in Ireland is included in all our PDF Extended History products and printed products wherever possible.

Jenings migration to the United States +

Early immigration records have shown some of the first of the name Jenings to arrive on North American shores were:

Jenings Settlers in United States in the 17th Century

Jenings Settlers in United States in the 18th Century

Jenings Settlers in West Indies in the 17th Century