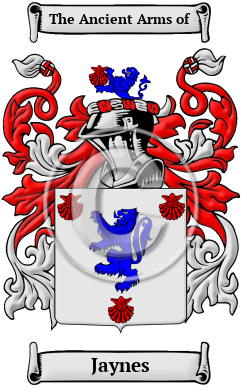 The Jaynes surname is a patronymic name created from the personal name Jan, which was a Middle English variant of the name John, or as "son of Jan." [1]

Early Origins of the Jaynes family

The surname Jaynes was first found in Worcestershire, where they held a family seat from very early times. They were also found early in Cornwall, where a record in the Ministers' Accounts of the Earldom of Cornwall shows a Simon Ianes in 1297. A John Janne was listed in the Subsidy Rolls for Cornwall in 1327, and a William Jan was listed in the Subsidy Rolls of Somerset in that same year. [2]

Early History of the Jaynes family

Before English spelling was standardized a few hundred years ago, spelling variations of names were a common occurrence. Elements of Latin, Norman French and other languages became incorporated into English throughout the Middle Ages, and name spellings changed even among the literate. The variations of the surname Jaynes include Janes, Jans, J'Anes, Jeanne, Jeynes, Jayne, Jane and many more.

Outstanding amongst the family at this time was Thomas Jane (Jan) (died 1500), English clergyman, Archdeacon of Essex (1480), Bishop of Norwich (1499-1500.) He was born at Milton Abbas, Dorsetshire, and educated at Winchester School, where he became a scholar in 1449. [4] Joseph Jane ( fl. 1600-1660), controversialist, was sprung of an old family which had long been influential in Liskeard, Cornwall. His father was mayor there in 1621, and in 1625 Jane represented the borough in parliament. In 1625 he was himself mayor of Liskeard, and...
Another 86 words (6 lines of text) are included under the topic Early Jaynes Notables in all our PDF Extended History products and printed products wherever possible.

In the United States, the name Jaynes is the 4,092nd most popular surname with an estimated 7,461 people with that name. [5]

Jaynes migration to the United States +

In England at this time, the uncertainty of the political and religious environment of the time caused many families to board ships for distant British colonies in the hopes of finding land and opportunity, and escaping persecution. The voyages were expensive, crowded, and difficult, though, and many arrived in North America sick, starved, and destitute. Those who did make it, however, were greeted with greater opportunities and freedoms that they could have experienced at home. Many of those families went on to make important contributions to the young nations in which they settled. Early immigration records have shown some of the first Jayness to arrive on North American shores:

Jaynes Settlers in United States in the 19th Century

Jaynes Settlers in United States in the 20th Century

Jaynes Settlers in Canada in the 20th Century

Jaynes Settlers in New Zealand in the 19th Century