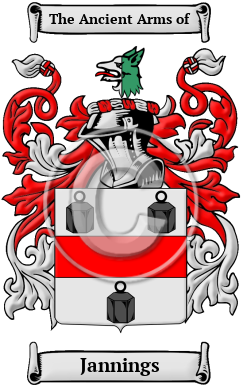 Early Origins of the Jannings family

Early History of the Jannings family

The Old and Middle English languages lacked definite spelling rules, and therefore, Breton surnames have many spelling variations. Latin and French, which were the official court languages, were also influential on the spelling of surnames. The spelling of surnames was rarely consistent in medieval times, and scribes and church officials recorded names as they sounded rather than adhering to any specific spelling rules. Therefore, it was common to find the same individual referred to with different spellings of their surname in the ancient chronicles. Moreover, a large number of foreign names were brought into England after the Norman Conquest, which accelerated and accentuated the alterations to the spelling of various surnames. The name has been spelled Jennings, Jenings, Jennins, Jennyns, Jennens, Jennynge, Jennynges, Jenyns and many more.

Notable of this family during the Middle Ages was Sir Stephen Jenyns (c.?1450-1523), English wool merchant from Wolverhampton who became Sheriff of London in 1499, before becoming Lord Mayor of London in 1509. Saint Edmund Gennings (1567-1591), was an English Catholic martyr, who was executed during the English Reformation. He was born in 1567 at Lichfield and brought up in the Protestant religion. He became a page in the service of Richard Sherwood, a Catholic gentleman, who afterwards went to Rheims and took holy orders. [4] John Gennings (c. 1570-1660), was an Englishman who was converted to Catholicism through the martyrdom of his...
Another 124 words (9 lines of text) are included under the topic Early Jannings Notables in all our PDF Extended History products and printed products wherever possible.

Migration of the Jannings family to Ireland

Some of the Jannings family moved to Ireland, but this topic is not covered in this excerpt.
Another 66 words (5 lines of text) about their life in Ireland is included in all our PDF Extended History products and printed products wherever possible.

Jannings migration to the United States +

Early North American records indicate many people bearing the name Jannings were among those contributors:

Jannings Settlers in United States in the 19th Century