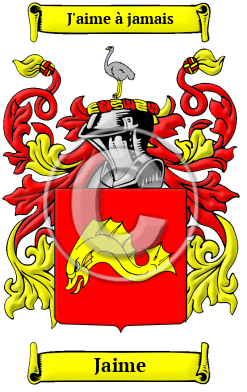 "The first appearance of this Christian name in our annals is in the Domesday [Book]." [2]

James the Cistercian (fl. 1270), also called James the Englishman, "was the first professor of philosophy and theology in the college which Stephen Lexington, Abbot of Clairvaux, founded in the house of the counts of Champagne at Paris for the instruction of young Cistercians. " [3]

Early Origins of the Jaime family

The surname Jaime was first found in Surrey. At an early time the name migrated from Normandy under the name FitzJames, as one of the noble house of Normandy. In nearby Utrecht the name became Van Haestrecht, whence it became FitzJames again, having migrated from Utrecht into England, into the manor of Ightham, at the time of King John, about the year 1210 A.D. They acquired the manors and estates of Hamon de Cravignuier, from De Inge, Zouch of Harringworth, Read, and Willoughby, and thence to the noble house of James.

"In early documents the name is usually Jacobus, but James is occasionally found in the 12th and 13th centuries, sometimes alternating with Jack or its diminutives Jackamin, Jackett and Jacklin." [4]

"The principal home of this name is in South Wales and Monmouthshire. Lower tells us of a very ancient Pembroke family possessing an estate successively held by thirteen persons bearing the name of William James. [2] The name is also frequent in Shropshire and Herefordshire on the Welsh border, and in the neighbouring counties of Gloucester and Stafford. It is also numerous in the south - west of England, especially in Somerset, Dorset, and Cornwall. In the eastern counties it nearly disappears, but it reappears in the north, though in no great numbers. " [5]

Early History of the Jaime family

Anglo-Norman names tend to be marked by an enormous number of spelling variations. This is largely due to the fact that Old and Middle English lacked any spelling rules when Norman French was introduced in the 11th century. The languages of the English courts at that time were French and Latin. These various languages mixed quite freely in the evolving social milieu. The final element of this mix is that medieval scribes spelled words according to their sounds rather than any definite rules, so a name was often spelled in as many different ways as the number of documents it appeared in. The name was spelled James, Fitzjames, St. James, Jaimes, Geames and many more.

In the United States, the name Jaime is the 4,933rd most popular surname with an estimated 4,974 people with that name. [6]

Migration of the Jaime family to Ireland

Some of the Jaime family moved to Ireland, but this topic is not covered in this excerpt. More information about their life in Ireland is included in all our PDF Extended History products and printed products wherever possible.

Jaime migration to the United States +

Because of the political and religious discontent in England, families began to migrate abroad in enormous numbers. Faced with persecution and starvation at home, the open frontiers and generally less oppressive social environment of the New World seemed tantalizing indeed to many English people. The trip was difficult, and not all made it unscathed, but many of those who did get to Canada and the United States made important contributions to the young nations in which they settled. Some of the first North American settlers with Jaime name or one of its variants:

Jaime Settlers in United States in the 19th Century