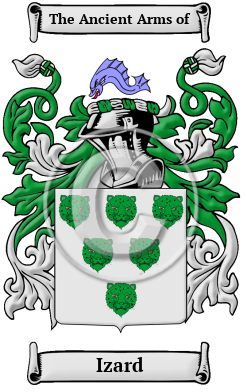 The history of the name Izard began when it was derived from The surname Izard is a patronymic surname, that is, derived from an ancestor's given name. Patronymic surnames belong to the category of hereditary surnames, and they arose out of the vernacular and religious given name traditions. The vernacular or regional naming tradition is the oldest and most pervasive type of patronymic surname. According to this custom, names were originally composed of vocabulary elements from the local language. Vernacular names that were derived from ancient Germanic personal names have cognates in most European languages. For example, the court of Charlemagne (742-814) was Christian and Latin-speaking, but the Frankish dialect of Old German was commonly used for personal names. Vernacular names were widespread throughout Normandy. Accordingly, many typical English and French names are in fact, originally of Germanic origin and often have cognates in other European countries. In this case, family tradition has it that the name is derived from the name Isolde, the wife of Tristram, nephew of the King of Cornwall, of the great Arthurian legends. According to the family tradition, Tristram escaped to Brittany, where he married Isolde, daughter of the Duke of Brittany. Their tragic love affair became the subject of the opera Tristan and Isolde by Wagner. On the other hand, it seems more likely that the name is derived from the Old German word ishild, which meant ice battle.

Early Origins of the Izard family

The surname Izard was first found in Gloucestershire where they held a family seat from ancient times, being granted lands in that shire soon after the Norman Conquest in 1066. Traditionally, the family was descended from Isolde, daughter of the Duke of Brittany in the fifth century who later became the wife of Tristram, of the great Arthurian legends, nephew of the King of Cornwall. Tristram escaped to Brittany and their tragic love affair became the subject of an opera by Wagner.

Early History of the Izard family

This web page shows only a small excerpt of our Izard research. Another 172 words (12 lines of text) covering the years 1400, 1569, 1577, 1599, 1695, and 1785 are included under the topic Early Izard History in all our PDF Extended History products and printed products wherever possible.

The Old and Middle English languages lacked definite spelling rules, and therefore, Breton surnames have many spelling variations. Latin and French, which were the official court languages, were also influential on the spelling of surnames. The spelling of surnames was rarely consistent in medieval times, and scribes and church officials recorded names as they sounded rather than adhering to any specific spelling rules. Therefore, it was common to find the same individual referred to with different spellings of their surname in the ancient chronicles. Moreover, a large number of foreign names were brought into England after the Norman Conquest, which accelerated and accentuated the alterations to the spelling of various surnames. The name has been spelled Izzat, Izat, Izatt, Issard, Isoed, Izzatt, Izzard, Izod, Essarts, Isett and many more.

More information is included under the topic Early Izard Notables in all our PDF Extended History products and printed products wherever possible.

Migration of the Izard family to Ireland

Some of the Izard family moved to Ireland, but this topic is not covered in this excerpt. More information about their life in Ireland is included in all our PDF Extended History products and printed products wherever possible.

Izard migration to the United States +

Early North American records indicate many people bearing the name Izard were among those contributors:

Izard Settlers in United States in the 17th Century

Izard Settlers in United States in the 18th Century

Izard Settlers in United States in the 19th Century