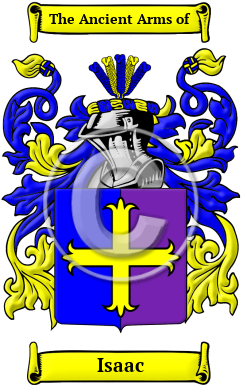 The ancient Anglo-Saxon surname Isaac came from the baptismal name Isaac. The surname Isaac referred to the son of Isaac which belongs to the category of patronymic surnames. The name is derived from the Hebrew word "yishaq" meaning "laughter." [1]

Early Origins of the Isaac family

The surname Isaac was first found in the Domesday Book of 1086. From this early entry, the name in both forename and surname forms became widespread with many early spellings. Willelmus (William) filius Ysac was listed in the Curia Regis Rolls for Essex in 1206; Henry Isaac was found in the Subsidy Rolls for Worcester in 1275, and Walter Isak in the Subsidy Rolls for Somerset in 1327. [5] [6]

Early History of the Isaac family

Sound was what guided spelling in the essentially pre-literate Middle Ages, so one person's name was often recorded under several variations during a single lifetime. Also, before the advent of the printing press and the first dictionaries, the English language was not standardized. Therefore, spelling variations were common, even among the names of the most literate people. Known variations of the Isaac family name include Isaacs, Isaac, Isaack, Isaacson, Izacke and others.

Notables of the family at this time include John Isaac of Bekesbourne, Sheriff of Kent in 1460. Henry Isaacson (1581-1654), was an English theologian and chronologer, born in the parish of St. Catherine, Coleman Street, London, in September 1581, and was the eldest son of Richard Isaacson. "He appears to have been educated under the care of Bishop Lancelot Andrewes, by whom he was sent to Pembroke Hall...
Another 68 words (5 lines of text) are included under the topic Early Isaac Notables in all our PDF Extended History products and printed products wherever possible.

Isaac migration to the United States +

For political, religious, and economic reasons, thousands of English families boarded ships for Ireland, the Canadas, the America colonies, and many of smaller tropical colonies in the hope of finding better lives abroad. Although the passage on the cramped, dank ships caused many to arrive in the New World diseased and starving, those families that survived the trip often went on to make valuable contributions to those new societies to which they arrived. Early immigrants bearing the Isaac surname or a spelling variation of the name include:

Isaac Settlers in United States in the 17th Century

Isaac Settlers in United States in the 18th Century

Isaac Settlers in United States in the 19th Century

Isaac Settlers in United States in the 20th Century

Isaac Settlers in Canada in the 19th Century

Isaac Settlers in Australia in the 18th Century

Isaac Settlers in Australia in the 19th Century

Isaac Settlers in New Zealand in the 19th Century

Historic Events for the Isaac family +