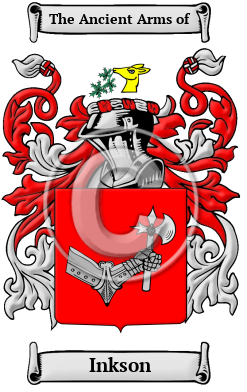 The Anglo-Saxon name Inkson comes from when the family resided in the village of Hinxton in the county of Cambridgeshire. This village dates back to at least the Domesday Book of 1086 where it was listed as Hestitone. [1] Years later, the village would be known as Hengstiton in 1202 and literally meant "estate associated with a man called Hengest," from the Old English personal name + "ing" + "tun." [2]

Early Origins of the Inkson family

Early History of the Inkson family

The English language only became standardized in the last few centuries; therefore,spelling variations are common among early Anglo-Saxon names. As the form of the English language changed, even the spelling of literate people's names evolved. Inkson has been recorded under many different variations, including Hingston, Hinkston, Hinkson, Hingeston, Hingson and others.

Distinguished members of the family include John Hingston (1612-1683), English composer, organist and viol player in the service of King Charles I, Oliver Cromwell, King Charles II and mentor to his 14-year-old godson, Henry Purcell. "From 1661 to 1666 Hingston was among the gentlemen of the Chapel Royal; in July 1663 his office is specified...
Another 54 words (4 lines of text) are included under the topic Early Inkson Notables in all our PDF Extended History products and printed products wherever possible.

Migration of the Inkson family to Ireland

Some of the Inkson family moved to Ireland, but this topic is not covered in this excerpt.
Another 86 words (6 lines of text) about their life in Ireland is included in all our PDF Extended History products and printed products wherever possible.

Inkson Settlers in New Zealand in the 19th Century