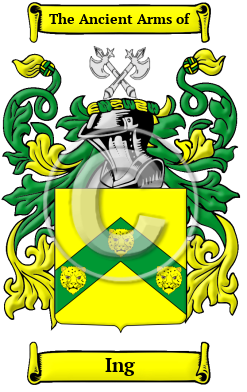 The ancestors of the Ing surname lived among the ancient Anglo-Saxon culture. The name comes from when they lived in an area that was referred to as the ing, which means the meadow by a river. [1] The name could also have been a baptismal name as in son of Inge. [2]

"Ing is an ancient clerical name in [Buckinghamshire]. Roger Inge was rector of Maid's Moreton in 1291; and John Inge was vicar of Stanton - Barry in 1425." [3]

Early Origins of the Ing family

The surname Ing was first found in Leicestershire where the first record of the family was found c. 1160 when the Latin form Inga was recorded. This entry may have been a forename but more likely a surname. As a forename, we continue with Inga filia Thoire in the Assize Rolls of Lincolnshire in 1202 and later Inga of the Hull in the Subsidy Rolls of Warwickshire in 1332.

The Hundredorum Rolls of 1273 had two listings for the family: John Inge, Oxfordshire; and William Inge, Huntingdonshire. [2] Robert Inge was rector of Salthouse, Norfolk in 1327. [5]

Early History of the Ing family

Before English spelling was standardized a few hundred years ago, spelling variations of names were a common occurrence. Elements of Latin, French and other languages became incorporated into English through the Middle Ages, and name spellings changed even among the literate. The variations of the surname Ing include Inge, Ing and others.

Notables of the family at this time include Hugh Inge or Ynge, (1527-1528) Achbishop of Dublin and Lord Chancellor of Ireland, born at Shepton Mallet, Somersetshire. He became a scholar of Winchester College in 1480, and in 1484 became scholar, and in 1488 fellow, of New College, Oxford, where he graduated in arts and resided until 1496. He travelled in foreign parts, and received the degree of D.D. from a continental university, being incorporated in the same degree at Oxford on 3 April 1511. He...
Another 85 words (6 lines of text) are included under the topic Early Ing Notables in all our PDF Extended History products and printed products wherever possible.

Ing migration to the United States +

Ing Settlers in United States in the 18th Century

Ing Settlers in United States in the 19th Century

Ing Settlers in Australia in the 19th Century

Ing Settlers in New Zealand in the 19th Century

Historic Events for the Ing family +