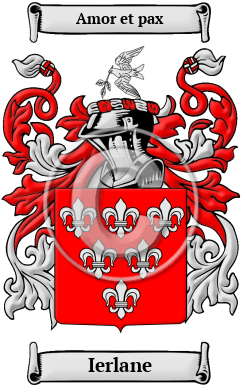 The forbears of the name Ierlane are thought to be of the ancient Scottish kingdom of Dalriada. The name indicates that the first bearer lived in Ireland. According to tradition, this surname originated when emigrants from Ireland acquired the Norman surnames of de Yrlande and le Ireis. Eventually, some of the descendants of these emigrants returned to the Emerald Isle as strangers. The names went through further changes, first occurring in their modern forms by 1664, in the Hearth Money Rolls for Armagh. The surnames Ireland and Irish were formerly well-known in Couny Kilkenny, but are now primarily found in Ulster. [1]

Early Origins of the Ierlane family

The surname Ierlane was first found in Stirlingshire, where one of the first records of the name was John Yberniens de Frertun who was a witness in 1288. Patrick of Ireland, was accused of housebreaking at Forfar, was hanged in 1296. David de Ireland was one of the Scots prisoners taken at Dunbar Castle in 1296; and cattle belonging to Walter de Ibemia were driven off from a moor near Aberdeen in the same year. Robert de Irland of Stirlingshire rendered homage to King Edward I of England in 1296. [2]

Early History of the Ierlane family

Medieval spelling was at best an intuitive process, and translation between Gaelic and English was no more effective. These factors caused an enormous number of spelling variations in Dalriadan names. In fact, it was not uncommon to see a father and son who spelled their name differently. Over the years, Ierlane has been spelled Ireland, Ierland and others.

Notable amongst the Clan from early times was Blessed William Ireland (1636-1679), alias Ironmonger, an English Jesuit. He the "eldest son of William Ireland of Crofton Hall, Yorkshire, by Barbara, daughter of Ralph (afterwards Lord) Eure of Washingborough, Lincolnshire. After being for some years confessor to the Poor Clares at Gravelines, he was in 1677 sent to the English mission, and shortly afterwards became procurator of the province in London. On the night of 28 Sept. 1678 he was arrested by a body of constables, headed by Titus Oates in person, and carried before the privy council, together with Thomas Jenison...
Another 151 words (11 lines of text) are included under the topic Early Ierlane Notables in all our PDF Extended History products and printed products wherever possible.

Migration of the Ierlane family to Ireland

Some of the Ierlane family moved to Ireland, but this topic is not covered in this excerpt.
Another 59 words (4 lines of text) about their life in Ireland is included in all our PDF Extended History products and printed products wherever possible.

Migration of the Ierlane family

Many settled along the east coast of what would become the United States and Canada. As the American War of Independence broke out, those who remained loyal to the crown went north to Canada as United Empire Loyalists. The ancestors of all of these hardy Dalriadan-Scottish settlers began to recover their collective history in the 20th century with the advent of the vibrant culture fostered by highland games and Clan societies in North America. Highland games, clan societies, and other organizations generated much renewed interest in Scottish heritage in the 20th century. The Ierlane were among the earliest of the Scottish settlers as immigration passenger lists have shown: Martha Ireland settled in Boston in 1635; along with Mary, Samuel and Thomas; John Ireland settled in Virginia in 1640; William Ireland settled in New England in 1663..