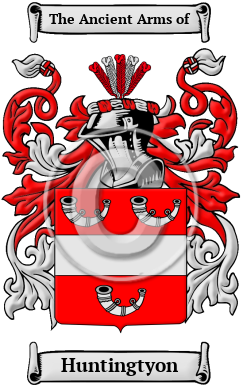 Huntingtyon is a name of ancient Anglo-Saxon origin and comes from the family once having lived in the settlement of Huntingdon in the county of Huntingdonshire, or in one of the various places called Huntington in Herefordshire, Shropshire, Staffordshire, and the North Riding of Yorkshire.

Early Origins of the Huntingtyon family

The surname Huntingtyon was first found in Huntingdon in Huntingdonshire. "This place, called by the Saxons Huntantun, and in the Norman survey Huntersdune, appears to have derived its name from its situation in a tract of country which was anciently an extensive forest abounding with deer, and well suited for the purposes of the chase. A castle was built here in 917 by Edward the Elder, and enlarged by David, Earl of Huntingdon and King of Scotland." [1]

The source Old English Bynames, includes Eustace de Huntedune, de Huntendone who was registered in the Domesday Book of 1086. [2] Years later, Humphrey de Huntendun was registered in Bedfordshire in 1202, as was William de Huntinton in the Subsidy Rolls for Worcestershire c. 1280. In Lancashire, Robert Huntyngdon was listed there in the Assize Rolls of 1375. [3]

Gregory of Huntingdon (fl. 1290), was an early English monk of Ramsey, of which abbey he is said to have been prior for thirty-eight years, is described as a man of much learning, acquainted with Latin, Greek, and Hebrew. [4]

In Yorkshire, Peter Wodfoghel de Huntington, was listed as Freeman of York (1313-1320) and the Yorkshire Poll Tax Rolls of 1379 included: Johannes de Huntyngton; and Thomas de Huntyngton as both holding lands there at that time. [5]

Early History of the Huntingtyon family

This web page shows only a small excerpt of our Huntingtyon research. Another 93 words (7 lines of text) covering the years 1553, 1637, 1701, 1683 and 1701 are included under the topic Early Huntingtyon History in all our PDF Extended History products and printed products wherever possible.

Sound was what guided spelling in the essentially pre-literate Middle Ages, so one person's name was often recorded under several variations during a single lifetime. Also, before the advent of the printing press and the first dictionaries, the English language was not standardized. Therefore, spelling variations were common, even among the names of the most literate people. Known variations of the Huntingtyon family name include Huntington, Huntingdon and others.

Notables of this surname at this time include: John Huntinton (fl. 1553), English poet and preacher who was apparently educated at Oxford, where he became 'noted among his contemporaries for a tolerable poet.' [4] Reverend...
Another 33 words (2 lines of text) are included under the topic Early Huntingtyon Notables in all our PDF Extended History products and printed products wherever possible.

Migration of the Huntingtyon family

For political, religious, and economic reasons, thousands of English families boarded ships for Ireland, Canada, the America colonies, and many of smaller tropical colonies in the hope of finding better lives abroad. Although the passage on the cramped, dank ships caused many to arrive in the New World diseased and starving, those families that survived the trip often went on to make valuable contributions to those new societies to which they arrived. Early immigrants bearing the Huntingtyon surname or a spelling variation of the name include: Charles Huntington arrived in New England in 1654; Christopher and Margaret Huntington settled in Boston in 1633; with their sons Simon and Thomas; Lydia Huntington settled in Virginia in 1642..