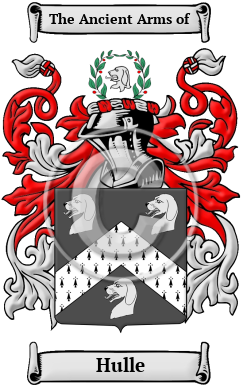 Hulle is a name of Anglo-Saxon origin and came from the personal name Hull. [1]

Alternatively the name could have been derived from Hull, an important seaport town in East Riding of Yorkshire. [2]

Early Origins of the Hulle family

The surname Hulle was first found in the Yorkshire at Kingston upon Hull, more commonly known as Hull, a city in the East Riding of Yorkshire. The place is derived from the River Hull and dates back to at least 1228 [3] and is home to the largest parish church in England dating back to 1285. In 1642, it was the scene of the first skirmish of the English Civil War when on orders of Parliament, the Governor of Hull, Sir John Hotham (d. 1645), shut the gates of the town to King Charles I. [4]

Early feudal rolls provided the king of the time with a method of cataloguing holdings for taxation, but today they provide a glimpse into the many surname spellings in use at that time.

The Hundredorum Rolls of 1273 include: Elyas de la Hulle in Wiltshire; and Gunnilda de la Hull and Roger a Hull, who were both listed in Oxfordshire at that time. [2]

Early History of the Hulle family

Spelling variations in names were a common occurrence before English spelling was standardized a few hundred years ago. In the Middle Ages, even the literate spelled their names differently as the English language incorporated elements of French, Latin, and other European languages. Many variations of the name Hulle have been found, including Hull, Hulle, Hulls and others.

Notables of this surname at this time include: Robert Hull or Hill (d. 1425), English judge, perhaps born at Heligan, Cornwall. "In 1399 he was king's serjeant, and was called on for a 'loan' of 100l. to aid the king against the Welsh and Scotch. On 14 May 1408, he was appointed a judge of the common pleas, and in 1415 he was one of the judges who tried Richard, earl of Cambridge, Henry, lord Scrope, and Sir Thomas Grey at Southampton for treason. " [6] Reverend Joseph Hull (1595-1665), was an English preacher from Devon who led a company of 106...
Another 193 words (14 lines of text) are included under the topic Early Hulle Notables in all our PDF Extended History products and printed products wherever possible.

Migration of the Hulle family to Ireland

Some of the Hulle family moved to Ireland, but this topic is not covered in this excerpt.
Another 78 words (6 lines of text) about their life in Ireland is included in all our PDF Extended History products and printed products wherever possible.

Hulle migration to the United States +

Families began migrating abroad in enormous numbers because of the political and religious discontent in England. Often faced with persecution and starvation in England, the possibilities of the New World attracted many English people. Although the ocean trips took many lives, those who did get to North America were instrumental in building the necessary groundwork for what would become for new powerful nations. Among the first immigrants of the name Hulle, or a variant listed above to cross the Atlantic and come to North America were :

Hulle Settlers in United States in the 19th Century