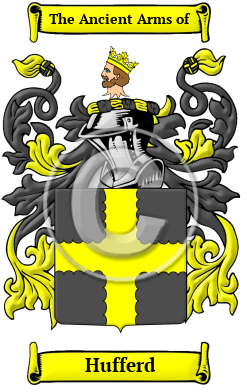 In ancient Anglo-Saxon England, the ancestors of the Hufferd surname lived in either of the settlements called Ufford in the counties of Northamptonshire and Suffolk. The surname Hufferd belongs to the large category of Anglo-Saxon habitation names, which are derived from pre-existing names for towns, villages, parishes, or farmsteads.

Early Origins of the Hufferd family

The surname Hufferd was first found in Suffolk at Ufford, a parish, in the union of Woodbridge, hundred of Wilford. [1] Ufford is also a civil parish in the city of Peterborough, Cambridgeshire. Both parishes are ancient. The Cambridgeshire parish dates back to Saxon times when it was first listed as Uffawyrtha in 948. The Suffolk parish dates back to the Domesday Book of 1086 when it was listed as Uffeworda. [2]

Both essentially mean "enclosure of a man called Uffa," from the Old English personal name + "worth." [3]

"Of this family, which afterwards arrived to great honour, Robert, a younger son of John de Peyton, of Peyton in the county of Suffolk, assumed his surname from the lordship of Ufford, in that shire, became Robert de Ufford. His son was summoned to Parliament as a Baron in 1308, and his grandson, also a Robert de Ufford, was created Earl of Suffolk. " [4]

The Hundredorum Rolls of 1273 may confirm this claim as Robert de Ufford was listed in Suffolk at that time. [5] Later the Feet of Fines listed Thomas Ufford in Essex in 1391. [6]

One source has interesting note about the family: "Robert de Ufford (d. 1298), was the founder of the greatness of the family. A younger son of a Suffolk landowner, John de Peyton, Robert assumed his surname from his lordship of Ufford in Suffolk, and attended Edward I on his crusade. Between 1276 and 1281 he acted as Justice of Ireland. He was instructed by Edward I to introduce English laws into Ireland, and practised skilfully but unscrupulously the policy of sowing dissension among the different Irish septs. He also built the castle of Roscommon 'at countless cost.' " [7]

Early History of the Hufferd family

It is only in the last few hundred years that the English language has been standardized. For that reason, early Anglo-Saxon surnames like Hufferd are characterized by many spelling variations. As the English language changed and incorporated elements of other European languages, even literate people changed the spelling of their names. The variations of the name Hufferd include: Ufford, Ufforde, Hawford, Hoffard and others.

Notables of the family at this time include Maud de Ufford, Countess of Oxford (1345/1346-1413), a wealthy English noblewoman and the wife of Thomas de Vere, 8th Earl of Oxford, only child was Robert de Vere, 9th Earl of Oxford, the favourite of King Richard II of England, took part in a conspiracy against King Henry IV of England and was sent to the Tower of London...
Another 67 words (5 lines of text) are included under the topic Early Hufferd Notables in all our PDF Extended History products and printed products wherever possible.

Migration of the Hufferd family

Many English families tired of political and religious strife left Britain for the new colonies in North America. Although the trip itself offered no relief - conditions on the ships were extremely cramped, and many travelers arrived diseased, starving, and destitute - these immigrants believed the opportunities that awaited them were worth the risks. Once in the colonies, many of the families did indeed prosper and, in turn, made significant contributions to the culture and economies of the growing colonies. An inquiry into the early roots of North American families has revealed a number of immigrants bearing the name Hufferd or a variant listed above: Isabel Ufford, who settled in Boston in 1632; along with John, Thomas; John Ufford settled in Barbados in 1680.