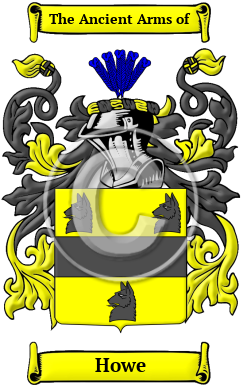 Furthermore, the name Howe may be derived from a residence in one of the many similarly named places: Hoe is in Norfolk, Hoo is in Kent, places called Hooe are in Devon and Sussex, Hose is in Leicestershire, places named Heugh are in Durham and Northumberland, and settlements called Hough are found in both Cheshire and Derby.

Early Origins of the Howe family

The surname Howe was first found in Berkshire, where the name could also have been a baptismal name as in "son of Hugh," [1] while another reference claims the name has geographical significance as in the south: "a small round hill" and in the north: "a hollow place or plain." The medieval form of the name is "At How" and is usually synonymous with Hill, having derived from the Anglo-Saxon word "how," meaning "mountain." [2]

However, we must look to Cambridgeshire to find the first listings on the name, where Roger del Howes and Richard del Howes were listed there in the Hundredorum Rolls of 1273. [1]

"The church [of Withington, Gloucestershire] is a cruciform structure, principally in the Norman style, but partly of later date: among the monuments is a handsome one to the memory of Sir John How(e), his wife, and nine children, in a small cross aisle on the south side of the church, the burial-place of the family." [3]

Early History of the Howe family

Sound was what guided spelling in the essentially pre-literate Middle Ages, so one person's name was often recorded under several variations during a single lifetime. Also, before the advent of the printing press and the first dictionaries, the English language was not standardized. Therefore, spelling variations were common, even among the names of the most literate people. Known variations of the Howe family name include Howe, Howes, How and others.

Migration of the Howe family to Ireland

Some of the Howe family moved to Ireland, but this topic is not covered in this excerpt.
Another 50 words (4 lines of text) about their life in Ireland is included in all our PDF Extended History products and printed products wherever possible.

Howe migration to the United States +

For political, religious, and economic reasons, thousands of English families boarded ships for Ireland, Canada, the America colonies, and many of smaller tropical colonies in the hope of finding better lives abroad. Although the passage on the cramped, dank ships caused many to arrive in the New World diseased and starving, those families that survived the trip often went on to make valuable contributions to those new societies to which they arrived. Early immigrants bearing the Howe surname or a spelling variation of the name include:

Howe Settlers in United States in the 17th Century

Howe Settlers in United States in the 18th Century

Howe Settlers in United States in the 19th Century

Howe Settlers in United States in the 20th Century

Howe Settlers in Canada in the 18th Century

Howe Settlers in Canada in the 19th Century

Howe Settlers in Australia in the 19th Century

Howe Settlers in New Zealand in the 19th Century

Howe Settlers in West Indies in the 17th Century

Historic Events for the Howe family +