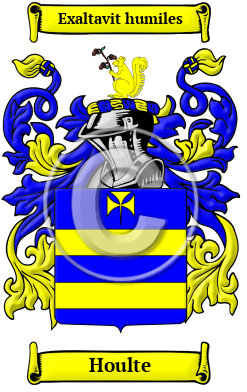 The name Houlte is part of the ancient legacy of the Anglo-Saxon tribes of Britain. It is a product of when the family lived near a grove or woods. The surname Houlte originally derived from the Old English word holt which meant a "wood" or "grove." [1]

Early Origins of the Houlte family

The surname Houlte was first found in Lancashire at Ashworth, a parochial chapelry in the parish of Middleton, union of Bury, hundred of Salford. "A family named Ashworth was seated here as early as the 13th century, and appears to have been succeeded by the Holts: Richard Holt, an active supporter of the royal cause in the civil war, had his estate sequestrated in 1643, but it was afterwards restored." [2]

Hugo de Holte was a Knights Templar in Kent in 1185 and later Simon del Holt was listed in the Pipe Rolls for Warwickshire in 1230. Walter in the Holte was found in Somerset in 1260 and Hugh atte Holte was in Surrey in 1268. [3]

In Somerset, William atte Holte and Walter atte Holte were both listed 1 Edward III (during the first year of King Edward III's reign.) [5]

"The Holts, of [Buckinghamshire], are, for the most part, gathered together in and around Aylesbury. The name occurred as Le Holt in the county six centuries ago, and also in the eastern counties of Norfolk, Essex, and Kent. Lancashire is also another great home of the name of Holt, which also extends into Cheshire." [6]

An important branch of the family was found at Aston in Warwickshire. "The manor was purchased in 1366 from the heiress of de Maidenhach by John atte Holt, of Birmingham, and remained for many generations in the possession of his lineal descendants, of whom several were distinguished for their talents and for the important stations they occupied in society. Edward Holt, sheriff of the county in 1574, resided in the adjoining manor of Duddeston, there being at that time in Aston only an ancient house, probably of timber, situated on the bank of the River Tame near the church, and the site of which, now overgrown with trees, is discoverable only by part of the moat by which it was surrounded. On the demise of Edward Holt in 1593, the estate descended to his son Thomas, the most distinguished member of the family, who is represented by Dugdale as eminent for his literary acquirements. He was sheriff in 1600: on the arrival of James VI of Scotland to assume the crown of England, he attended that monarch in his route from Yorkshire, where he received the honour of knighthood; and in 1612 he was created one of the order of baronets, then recently instituted. Sir Thomas Holt enclosed the park, and erected the present stately Hall of Aston, unrivalled in these parts for beauty and magnificence, which he commenced in 1618, and completed in 1635." [2]

Early History of the Houlte family

The first dictionaries that appeared in the last few hundred years did much to standardize the English language. Before that time, spelling variations in names were a common occurrence. The language was changing, incorporating pieces of other languages, and the spelling of names changed with it. Houlte has been spelled many different ways, including Holte, Holt and others.

Distinguished members of the family include John Beauchamp de Holt, created Baron Kidderminster, by Richard III in 1387. John Holt (d. 1418), the English judge, "was a native and landowner of Northamptonshire, and his name occurs in the year-books from the fortieth year of Edward III onwards. In the last year of that reign he became a king's serjeant." [7] Thomas Holt (1578?-1624), was an architect, a native of York, born about 1578, is noteworthy for the important works in Renaissance architecture executed by him at Oxford. [7] William Holt (1545-1599), was a Jesuit, was born at Ashworth in Lancashire in 1545. [7] Sir John...
Another 125 words (9 lines of text) are included under the topic Early Houlte Notables in all our PDF Extended History products and printed products wherever possible.

Migration of the Houlte family to Ireland

Some of the Houlte family moved to Ireland, but this topic is not covered in this excerpt.
Another 34 words (2 lines of text) about their life in Ireland is included in all our PDF Extended History products and printed products wherever possible.

Houlte migration to the United States +

Thousands of English families in this era began to emigrate the New World in search of land and freedom from religious and political persecution. Although the passage was expensive and the ships were dark, crowded, and unsafe, those who made the voyage safely were rewarded with opportunities unavailable to them in their homeland. Research into passenger and immigration lists has revealed some of the very first Houltes to arrive in North America:

Houlte Settlers in United States in the 17th Century