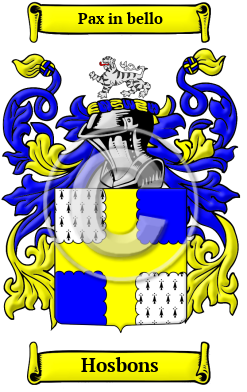 One of the most common classes of Scottish surnames is the patronymic surname, which arose out of the vernacular and religious naming traditions. The vernacular or regional naming tradition is the oldest and most pervasive type of patronymic surname. According to this custom, names were originally composed of vocabulary elements from the local language. Patronymic surnames of this type were usually derived from the personal name of the original bearer's father. The surname Hosbons is derived from the Old Norse personal name Asbjorn, meaning divine bear. Alternatively the name was Anglicized as Osbeorn and Osbern from the Old English word "be(o)rn" which meant "god warrior." Osbernus was presbyter in record (1097-1107), and Osbern was capellanus (chaplain) from 1107 to 1124. Osbernus was abbot of Jaddewurd, (c. 1150) and Osbern was capellanus of Glasgow, c. 1180. [1]

Early Origins of the Hosbons family

The surname Hosbons was first found in Kent, where they were recorded as a family of great antiquity seated as Lords of the manor of Hartlip. They were descended from Sarum in Normandy, Osborne was expelled from Normandy in 1054 by King William. He sought refuge at the Court of MacBeth in Scotland, however he made his peace with William after the Conquest and was elected Bishop of Sarum and became one of only three people permitted to dine at the King's Table.

Early History of the Hosbons family

Scottish surnames are distinguished by a multitude of spelling variations because, over the centuries, the names were frequently translated into and from Gaelic. Furthermore, the spelling of surnames was rarely consistent because medieval scribes and church officials recorded names as they sounded, rather than adhering to any specific spelling rules. The different versions of a surname, such as the inclusion of the patronymic prefix "Mac", frequently indicated a religious or Clan affiliation or even a division of the family. Moreover, a large number of foreign names were brought into Scotland, accelerating accentuating the alterations to various surnames. The name Hosbons has also been spelled Osborne, Osborn, Osbourne, Osbourn, Osburn, Osburne, Osbern and many more.

More information is included under the topic Early Hosbons Notables in all our PDF Extended History products and printed products wherever possible.

Migration of the Hosbons family to Ireland

Some of the Hosbons family moved to Ireland, but this topic is not covered in this excerpt.
Another 132 words (9 lines of text) about their life in Ireland is included in all our PDF Extended History products and printed products wherever possible.

Migration of the Hosbons family

Some of the first immigrants to cross the Atlantic and come to North America carried the name Hosbons, or a variant listed above: Richard Osborn settled in Barbados in 1634; Thomas Osborn settled in Virginia in 1623; Edward, George, John, Joseph, Mary, William Osborn all arrived in Philadelphia between 1840 and 1860.