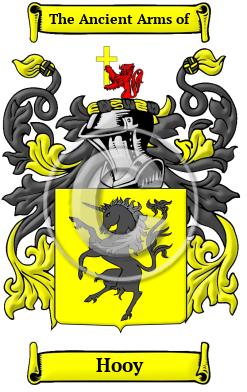 The Hooy surname is a local name derived from the name of the Orkney island of Hoy, written in the 13th as "Haey," meaning "high island." Hoy is the second largest island in the Orkney Islands, located off the northeastern coast of Scotland. There is also thought to have been a place so named near the England-Scotland border, but it no longer exists. [1]

Early Origins of the Hooy family

The surname Hooy was first found in the region of the Orkney Islands (Gaelic: Insi Orc, “Island of the wild pigs”), the historic, northernmost island region of Scotland and early Pictish land, which came to be a stronghold of the Vikings in the 9th century.

According to Black, there are two possible origins in Scotland: Jhone Hoye of Colmesliehill, 1607, and Jasper Hoye, who was found there in the following year. Peter Hoy in Newhouses, 1653, from the Borders; and the Orkney surname is also of local origin, from the island of Hoy (c. 1225 Haey high island). [1]

While most people hail from Scotland, to the south in England, Yorkshire was an early stronghold for the family. The Yorkshire Poll Tax Rolls of 1379 included: Adamdel Hoy; Hugo del Hoy, 1379; and Robertus del Hoye, carnifex. [2]

Still further to the south, we found John le Hoy registered in Wiltshire in 1255, Richard Hoye in the Assize Rolls for Somerset in 1278; and Robert le Hoy in the Subsidy Rolls for Cumbria (Cumberland) in 1327. [3]

Early History of the Hooy family

Spelling variations of this family name include: Hoy, Haey, Hooy and others.

Notable amongst the Clan at this time was Thomas Hoy (1659-1718), an English physician and poet. He was born on 12 December 1659 (School Reg.), and was the son of Clement Hoy of London. He was elected a probationary fellow of St...
Another 42 words (3 lines of text) are included under the topic Early Hooy Notables in all our PDF Extended History products and printed products wherever possible.

Migration of the Hooy family to Ireland

Some of the Hooy family moved to Ireland, but this topic is not covered in this excerpt.
Another 94 words (7 lines of text) about their life in Ireland is included in all our PDF Extended History products and printed products wherever possible.

Hooy migration to the United States +

Hooy Settlers in United States in the 18th Century